Rosshäuser tunnel of the BLS is dedicated – economy 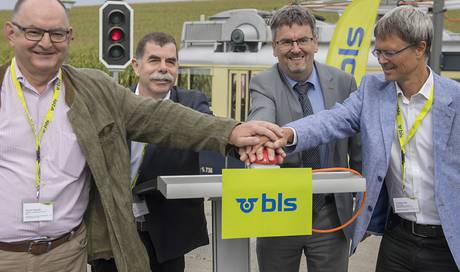 The tunnel belongs to a new lane with two lanes, which replaces the previous route between Rosshäusern and Mauss. This is single-track, curvy and can be driven with a maximum speed of 90. The only largely straight path through the tunnel is 300 meters shorter than the old one and trains run at 160 km / h.

The stored time is only 90 seconds. However, due to the new double lane, the operation of the BLS is simpler: the delay of a train has less impact on the entire network due to the greater flexibility in the lane sections.

Punctuality is therefore greater. The BLS can also introduce new stops on two S-Bahn lines from Bern as of December 2018, as the BLS announced at the opening. With the new tunnel the BLS also saves the rehabilitation of the Einspurstrecke with the more than 100 years old Rosshäuser tunnel of today.

On 3 September, the transition from the old, winding path to the new line will take place.

BLS, the Confederation and the cantons of Bern, Friborg and Neuchatel spent CHF 265 million on the 3.7-kilometer double-track expansion between Rosshäusern and Mauss. This amount includes the costs of the tunnel and the renovation of the Rosshäusern train station.

The construction of the tunnel took eighteen months longer than planned. This was due to unexpected problems with a geological fault zone. The rock in this zone was very fragile. A worker died in September 2013 when a stone fell on his head.

Because of this accident and the fault zone, the BLS positioned itself well one month after the accident, the tunnel borings. The construction work was finally continued in January 2013 with a new tunneling method and propulsion from both sides instead of only from the east. The costs increased from 200 to 265 million francs.

Fest and another big project

The Berne railway company organized a small party for the public at the opening. The program included an extra trip with the historic "Blue Arrow" for invited guests, speeches, musical entertainment and a train journey. The building was inaugurated by symbolically placing a train signal on green.

The BLS soon starts with another major project: the renovation of the striking railway viaduct over the Saane between Mauss and Gümmenen. The milestone viaduct from 1901 is simultaneously extended to double track. The long-term goal of the BLS is a double track on the whole line between Bern and Neuchâtel.