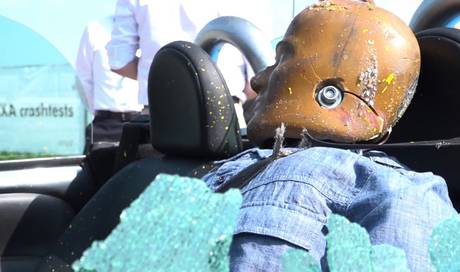 Imagine that you are at a crossroads with the car and suddenly a drone falls from the sky. If they wear something, their weight can leave a nice dent.

It is difficult to imagine what happens when a pedestrian, bicycle or convertible driver is hit by such a drone. Exactly this scenario, the insurance company Axa has simulated in its latest crash tests: a drone carrying a filled plastic box crashes uncontrollably on the driver of a convertible.

Although delayed by the panel, the crash leaves brutal traces on the doll's skull.

"The new danger comes from the air", says accident researcher Bettina Zahnd of the Axa. "Packet drones are relatively heavy and if they have a failure or are hacked and fall out of the sky, they do so uncontrollably and quickly."

Another, not so new risk factor, according to the Axa is the e-bike. In the video of the crash test you can see how brute the driver of a cargo bike first through the windshield and then fly through the air during a car accident.

The investigator of the accident said: "E-bikes have shaped our cityscape for a long time, but they look the same as ordinary bikes and are therefore often underestimated in terms of speed." (Smo)