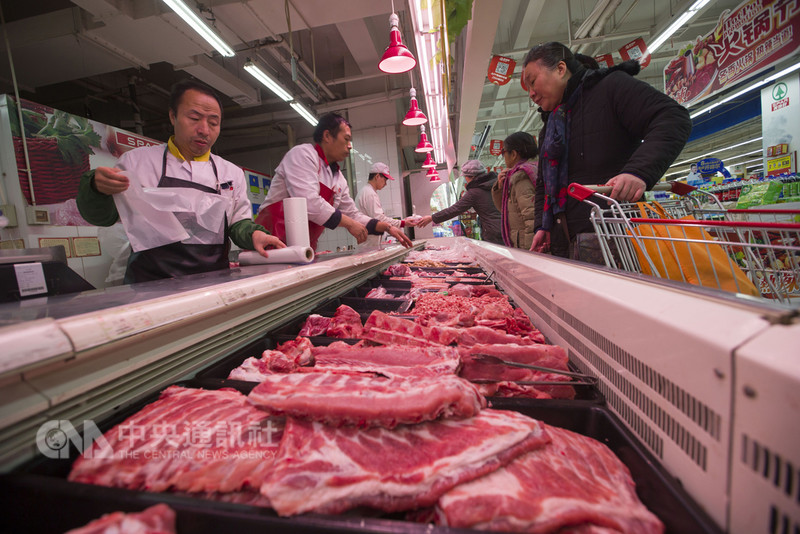 Chinese pig prices have risen from 33% to mid-August by 33%. The trade war in combination with the decline of African piglets and the production of summer granules has increasingly caused the Chinese people to see prices rise rapidly. The photo shows that people bought pork in the supermarket in Taiyuan, Shanxi in January. (delivered by the China News Service) Central News Agency August 25, 107

(Central News Agency, Taipei, 25th) – Sino-US trade wars, African swine fever, cuts in food production in the summer and flooding of vegetable cities, a series of factors that have led to price rises in China. Many local people are concerned that after the rise in house prices, the next step is that the price of citizens will generally rise.

The tariff enhancement measures for China and the United States to sacrifice US $ 50 billion of products have already landed, which will lead to an increase in the price of imported goods, including the price increase of imported raw materials may also increase the price of other local foods and increase products.

The price of live pigs, which has always been a price indicator, increased by 33% from mid-May to mid-August. According to the Securities Times, this is related to the confirmed African swine fever in August. Feng Yonghui, chief analyst of the China Pig Alert Network, said that although the African swine fever epidemic has made the price of live pigs in the Northeast weak, the prices in the surrounding markets have increased.

Shandong Shouguang, known as the "home town of vegetables", was flooded on the 20th because three upstream reservoirs were flooded under heavy rainfall and more than 200,000 greenhouses were damaged. It is estimated that the outside world will influence the price of vegetables.

The most deadly people feel that the uncomfortable atmosphere is the news of the failure of wheat this summer. According to China's National Grain and Material Reserve Bureau, from the 15th, the total purchase of wheat in the main producing areas this year was 41.059 million tons, an annual decrease of 20.031 million tons, a reduction of more than 30%, of which Henan fell sharply by 55.1%, and Anhui also declined by 45.9%.

The media reported that the reason for the reduction of summer grain production is that the climate factors have led to a decline in the yield of many places and have influenced the quality of wheat. First, the official adjusted the purchase policy and the purchase price in May. Some farmers hesitate to sell high quality wheat, prefer to wait for the price increase and then sell. out.

The above-mentioned natural disasters and man-made disasters are probably the cause of recent price increases.

On the 22nd, an article entitled "Prices started to accelerate after the rent!" Scattered rapidly across the Chinese community platform. A few days ago, Fang Zhong data indicated that the rent in Beijing had increased by more than 25% in July. The Beijing authorities therefore interviewed the heads of ten housing lease companies and demanded that they do not promise to increase rent.

This article is of the opinion that house prices in large cities such as Beijing have risen in the past ten years and that rents have also risen sharply. Over the past two years, the stock market has been sluggish and official policy has demanded a rise in house prices. A large number of funds that can not go anywhere and are accustomed to earning money quickly will probably enter certain industrial chains and eventually lead to an overall rise in prices of people's necessities.

The article says that people are really concerned about cruel and rapid inflation, which will seriously affect the quality of life of the middle and low income groups. (Editor: Zhang Shuzhen) 1070825