Down! 16 children patrol the theft of the temple Amphetamine addicts take more than 150 tablets daily. 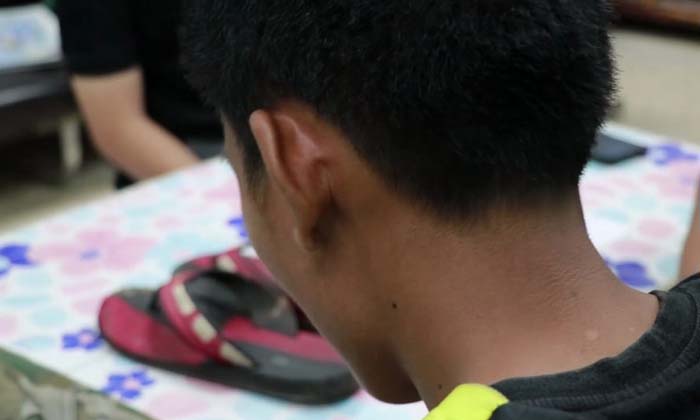 On August 19, 61 journalists reported that police research kit Muang Amnat Charoen Muang It did not take long before I found out that a bunch of young men were under the custody of the abbot. Reported to the supervisor. Before the officer was taken to investigate the scene.

On the spot The police investigated the villains at CCTV in the presbytery of the abbot. Mr. B (nickname), 16 years old, after the incident the police investigate that mr. B. has opened a room for rent in the Tungtawan Resort, Muang District, Amnat Charoen Police. Look at the hotel.

Arrival in the room. I found the suspect in the room. The officer was asked to search. During the robbery The accused uttered a flurry of suspicion with his hands in the right pockets. The authorities were looking for the search. It seems that one amphetamine tablet is packed in cigarette paper. The authorities then arrested the accused for further investigation. Muang Amnat Charoen Muang

Pol.Lt.Thawat Erawan Wongprasert Revealed that of the preliminary investigation. Accused of that confession. I have to steal the area. Prayer AbTempel, real pleasure. Like the CCTV camera records it. The phone is black Samsung cell phone 1 phone, iPhone 6s 1 machine, the suspect brought the iPhone 6s to pawn in the Krungthong Center for 3,000 baht and spent the money to buy amphetamine. eaters

In addition, the accused also confessed that the pantheon of the various temples. I have to say. All 4 burglaries are stolen. To exchange for amphetamine with Mr. Louis (Lao people) in Khemmarat, Ubon Ratchathani. Every day, the defendant must take amphetamine of at least 100 – 150 tablets per day.

Today the suspect took drugs before the police arrested all 60 tablets while officials questioned. The accused expressed a serious malaise. Taming of flares The officers took the suspects with the police. Muang Amnat Charoen Muang To prosecute in accordance with the law. It will inform the parents of the accused.