A frightening image appeared at the school 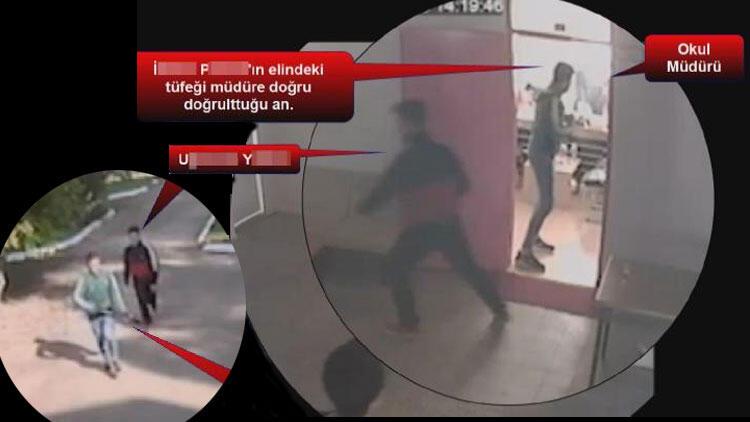 Aymak Kökmen, the head of the Kaypro Multi-Programmed Anatolian High School, was attacked on 15 December 2017 by the pneumatic rifle of İP by his students at the school he served for three years. The father of two children who had been seriously injured by bullets that hit several parts of his body, shot, was removed from the state hospital by the ambulance. Root, which was treated, was not saved despite the intervention of the doctors.

The gendarmerie, after the incident, students from the 11th class with disciplinary questions about İ.P. and the father of U.Y., who had been kidnapped from school a while ago and had other school travelers registered, was taken into custody. Students arrested İ.P. friend U.Y. and the father of the U.Y. accused of being a tyrant B.Y. weighted life imprisonment request, as well as C.A. and Y.O. a case was also submitted for helping and appointing nominated students.

B. Y., accused of being militant, took the heavy psychiatric medication with the drug for the ISA İ.P. and his son UY, said: "If you're tired of your life, go for it, I'll look into you, what will happen to you, I'm after you, do not eat your head at ease, kill it and kill you BY also went to his side after his son was taken from school and told the director Kökmen: "My son did no harm, he did what he did, I am proud of my son, there is no such thing as a gun, no gun, not a gun. "

İ.P., a friend of the Defendant U.Y., who was prosecuted to be prosecuted in the Ödemiş Heavy Criminal Court for aggravated life imprisonment. and the father of U.Y. B.Y. Other students accused of help and abuse by C.A. and Y.O., security cameras & # 39; s were recorded on the day of the incident.

In the pictures of the criminal experts who have entered the file, İ.P. and his partner U.Y., movements for the school before the murder, C.A. with Y.O. The images continued to show that the students had met the school garden with a pumped rifle in the hands of the İ.P., when they encountered, and at that time the students also suffered great panic and escaped.

The images continued with the schoolmaster who opened the door to his room, the fire of İP, Ayhan Kökmen sitting in his seat took place. The latest images of speed cameras showed that the two defendants escaped by motorcycles and pedestrians.