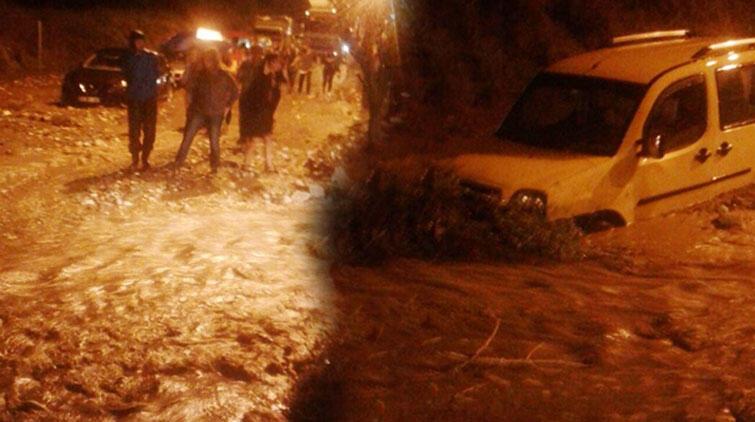 The downpour that started in Bandirma in the morning hours was again effective in the evenings. Increasing the intensity of the torrential rains was a negative impact on life, frequent lightning flashes and after a thunderstorm some parts of the city experienced power outages. The waters blew through the lining of the railings, the streets and streets turned to the lake. He has done a lot of effort not to enter the workshop where artisanal water flows. The citizens who were caught outside in the rain tried to hide in sheltered places. Because of the water that accumulated on the road, the drivers had difficult times and there were also disruptions in traffic. Especially in İnönü Cumhuriyet and NATO streets came to a standstill of traffic. Heavy rainfall in the district was also effective in the evening and rain water in many areas turned into saddle.

CRISIS CENTER IS MADE

A crisis center was established under Balikesiregouverneur Ersin Yazıcı. Governor Yazıcı accompanied the AK party Balikesir deputy Yavuz Subaşı, metropolite Mayor Zekai Kafaoglu, Bandırma District Governor Günhan-writer and Bandırma Mayor Dursun Mirza visited the traders who suffered from the torrent, the Square of the Republic, the martyrs Süleyman Bey and the exploratory acar walks There was a review.

AFAD & # 39; keep working in the region stating that the Governor Printer, 130.6 kilograms of rainfall said the square meters. The printer said: "This disaster has flooded the workplace of many of our craftsmen and thank God we have no crippled citizen, a person and an animal are not harmed, everyone is heard, and many people and vehicles have been rescued from the situation. there is no loss of life There is material damage There are a few village roads in Erdek Inshallah we will open the whole evening tonight With the information we have obtained from meteorology According to him, the following can be done to the owners of The company or insurance related transactions can handle such documents: We are glad that there is not such a loss of human lives and great loss of lives due to such heavy rainfall .We will soon have two municipalities. "

Zekai Kafaoglu, mayor of the metropolitan community, stated that they were mobilizing all staff in Bandirma and said, "Our teams saved 356 of our citizens with 115 staff and 32 vehicles after 700 communications, there is no loss of fun," he said. .

The mayor of Bandirma stated that Bandırma witnessed such a disaster ten years later and declared: "The water was so high that even the granite was removed, dismantling the tidal stones and granite." The crew waited in the dominant areas. but the flood was very intense. "Our teams went to work immediately, we'll fix it as soon as possible and we'll finish it soon.