Communist president Maçoğlu: I am ashamed to say; 20 electric pole can not go back 2 years 2 years – Agenda 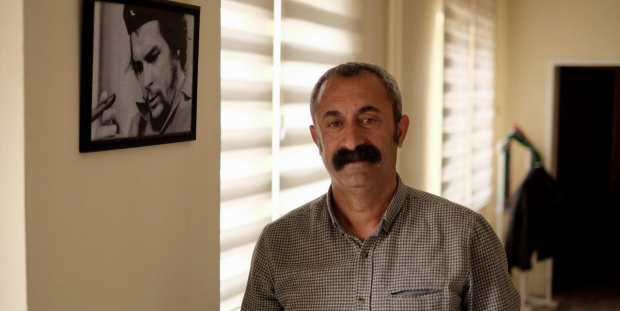 Ovacik & # 39; s Communist Party Mayor engaged in agriculture with the villagers in the District Treasury Fatih Mehmet Maçoğluwas close because he could not have a 2 meter long 20 meter long electricity pole, which corresponds to the yellow line he made for blind people. "I wrote TEDAŞ for 2 years, I've said it often, but they have not done it anymore." I am now ashamed to write and not to say, "said Maçoğlu.

the spokesman Respect Ozturkreport is as follows:

Ovacik district of Tunceli, Turkey Communist Party (TKP) won by a single municipality. Mayor Fatih Mehmet Maçoğlu has led the district for 6 years with the villagers. Maçoğl of the projects that are performed most prominently among the mayors in Turkey.

Maçaoğlu, known as "Communist president", together with the villagers has 650 hectares of chickpeas, beans, lentils and potatoes from the treasury. With the income generated it helps the poor families in the city, and 78 students offer scholarships of 200 pounds. In recent years, honey production has also been added to the agricultural development that was started in Ovacık under the management of Maçoğlu. Production became cooperative. The production of Maçoğlu & # 39; nun is no longer its own county.

The woman gets out of control

Maçoğlu, Tunceli & # 39; nin Hozat and chickpeas from the Pertek district. Artvin Hopa makes tea production, it gives this locals cheap. These are the bags that they put in the People & # 39; s Education Directorate and make women. Maçoğlu, the municipality, the old health technician who declares the income of the cooperative on the district square, who has no authority and who has received less salary than his own employee, does not want to change his party in the next elections. The goal of Maçoğlu is to transport the cultures they have raised in the region to big cities such as Istanbul, Izmir and Ankara. It started its first application in Istanbul. It is expensive to ship products with freight, so they carry it with a truck.

Maçoğlu explained his work as follows:

"Everywhere I go, I look at the work of that municipality, for example I saw yellow lines on the sidewalk I have the same thing for myself Come on, they seem to have problems The yellow lines sometimes coincide with the middle of the The piles have to be retracted 2 meters, I wrote TEDAŞ for 2 years to pull 20 piles back two meters, I have said it repeatedly, but they have not done it, I am ashamed to write or not to write. "

We keep the watch to protect the beans.

Mayor Fatih Mehmet Maçoğlu works with his wife and daughter with chickpeas, lentils and beans. He helps villagers. Maçoğlu explains how production is planned and done as follows:

"Halfway through the village we have made half of the communal production area, and in our production areas, especially in bean plant areas, we keep watch over Sabah.

One of the most popular foods of the month is beans. We keep a guard to protect our day from the moon. But you do not have to use a gun to get rid of it. We try to keep the moon close to the production area by shouting light at night. In addition to monitoring, irrigation works of products are carried out. Whether it is time to harvest, whether it is the guard, the people involved in the production or the people who use the field, the income is shared equally. We distribute the straw from the Moroccan to those who are cattle farmers. & # 39;

His fame spread across Turkey Ovacik Mayor Mehmet Maçoğl is finally Mayor of Edremit Kamil SakaHe was in Balikesir as the invitation of. Maçoğlu said: "Edremit is beautiful, but Ovacik is more beautiful." "Communist president" Maçoğlu, who explains that Ovacik has also worked on increasing the tourism potential, said:

"Every year about 100 thousand people visit Ovacik, especially young people come to my camp to camp and to camp We have accommodation now They do not want to leave the department When I left the county, I counted the vehicles to Ovacik. 157 cars went to Ovacik, I am very happy, there are people who want to invest in my field, and we like it. "