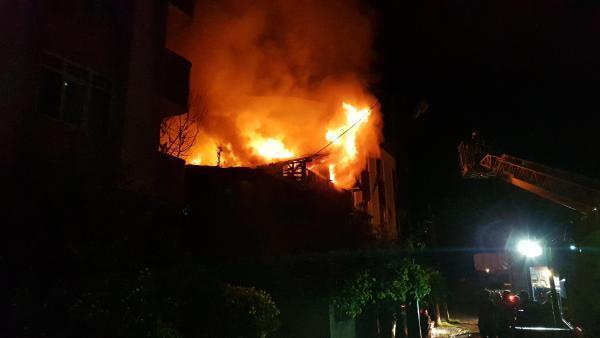 Dinçer AKBİR- Alişan KOYUNCU / DERİNCE (Kocaeli) – In the Derince district of KOCAELİ, two children died and three children were injured by the fire in the wooden house where the Syrian family lived.
Derince Yavuz district Sultan District Cevher Dudayev Street in a 2-storey wooden house where the Syrian family at night broke a fire. The flames covered the wooden building in a short time. After the notification of the residents of the region, fire, health and police teams were sent. Realizing that there were only children in the house, the residents rushed to help before the fire brigade arrived. Citizens who enter the house brought out 3 children. As soon as the firefighters reached the scene, three children with burns on their bodies were taken to the Derince Training and Research Hospital with ambulance.
During the work of the fire brigade, relatives who learned the fire and came to the site said that there were 5 children aged 3 to 14 years old at home. The fire was extinguished for about 2 hours with hard firefighters. The teams entered the house, reaching the lifeless body of 2 children. The parents of the children shouted it out, shed tears and suffered a nervous breakdown.
While the funeral of young children was taken to the mortuary, the study was started to determine the cause of the fire when the house became unusable.