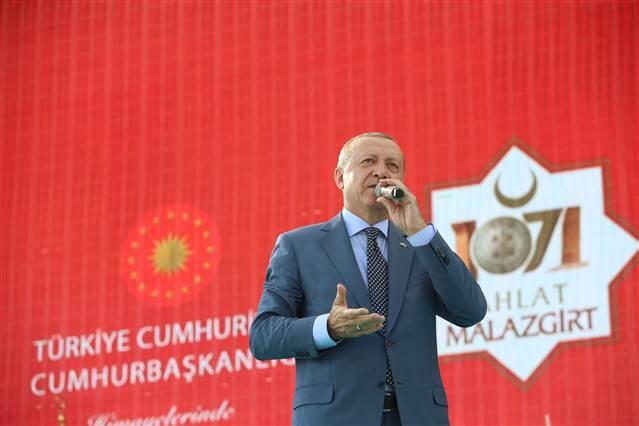 These are the headlines from Erdogan's speech:

Thousands of people came here to fill the plain of Malazgirt. I just got the official figure, 75 thousand people. There is much more to do here. I hope that we can regulate this area in an environmentally friendly way, especially with selviler and make it better.

PRESIDENCY OF THE AHLAT PRESIDY

We must guard this region, which is the symbol of the unity of your nation. A nice memory came during a visit to Mr. Bahceli: Ahlat is worthy of a presidential residence. Because the Ottoman Sultan Alpaslan has built it there, and we will inherit such a willingness to come as heirs. Today we have spoken to the governor and mayor. They have thought of a place of 1071 square meters. We will not. The 1071 square meter residential area will be at least 5 hectares with environmental legislation. Our mayor also said at least 10 hectares of shit. This is a signpost, I hope there will be no end to it. We have declared the Malazgirt War region a national park and have started organizing it. This year the first branch of the national park area was taken into use.

Conquest is the name of rebellion against oppression. Our civilization is a conquering civilization. The biggest view is the conquest of the hearts. How many centuries beyond our existence continues on this count. The victory we had in Malazgirt opened the way to the middle of Europe. That is why Malazgirt Mecca, Medina, Bursa, Edirne, Istanbul, means all Balkan countries. If we forget the Malazgirt soul, we remain what we are before. We have not only achieved a victory in Malazgirt, but in Malazgirt we declare the whole world that we are a nation. If we fail to keep the Malagasy spirit alive, we will lose our future together.

This great miracle that spans the fortress is very good. Take Mecca, Medina. Look at these blessed countries with your honor. Take possession of Jerusalem. Take the Seljuks and the Ottomans. Claim the Ottoman capitals, the Balkans, the son of the victor. Go very well out of the battle for salvation and the republic. Take possession of July 15th. Never forget this historical tradition. You hope for this nation and the whole humanity of this country.

Anatolia is the key to the future of humanity. Great leaders wanted to take over Anatolia. Here in Çanakkale Gazi Mustafa Kemal fought with his youth against the seven dwarfs and said "Canakkale is inaccessible". Nice martyrs were given. It is very wrong for those who are looking for cyclical developments in the causes of the problems that our country is experiencing. Scenarios written behind the scenes have such a background. Remember that if an Anatolian arch is destroyed, it will not be the Middle East, Central Asia or the Balkans. All these areas are exposed to danger, which is the shadow of a large plane over them.

When we show the least signs of weakness, you will see that they resemble carcasses. We think that some of the detainees in our opinion are the problems Tayyip Erdogan. It does not matter is the issue of Turkey. It's about Islam. A harassed cow and a deadly fate are held in a helpless disease of death. I congratulate once again the 947th anniversary of our victory in Malazgirt. I am grateful to all heroes in this gas.