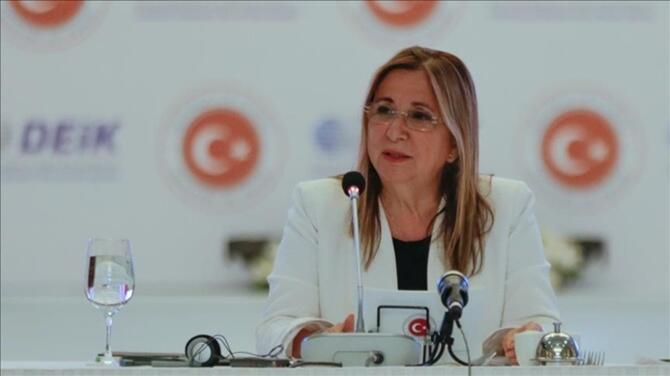 Minister of Commerce Ruhsar Pekcan stated that Türk Eximbank increased its financial support to exporters by 9 percent this year in January-July and increased it by 24.1 billion dollars. "Eximbank will provide $ 46 billion in financial support by the end of the year, and the projects will always stand next to the exporter," he said.

In the period January-July of this year, Türk Eximbank increased its financing support by 9 percent compared to the previous year and increased it by 24.1 billion dollars, adding that $ 14.5 billion of this amount of cash loans and 9 , $ 6 billion is insurance support.

Pekcan, "Eximbank Eximbank will provide $ 46 billion in financing support by the end of the year, with new applications and projects always at the expense of the exporter." He said.

"We will conduct intensive studies to increase the number of Eximbank customers and increase the total share of SMEs among customers in the framework of our Ministry's 100-day implementation program." 69% of companies benefiting from the The financing of Eximbank are SMEs and the bank's export portfolio increased by 16% in 2017. The number of 900 exporters has so far increased to 9000 871. The end of the year reached 11 thousand exporters. "

Peccan pointed out that low-cost outsourcing and international financing activities in 2017 and 2018 have been fruitful for stronger support to exporters: "External sources of CBTB reached $ 10 billion and the cost of new funding sources has decreased compared to previous years." in their evaluations.

Pekcan explains that the costs of exporters have been increased by 5 percent in business loans in accordance with exporters' requirements. "Our exporters are allowed to breathe." he said. Pekcan stressed that it has accommodated Eximbank, which only deals with collateral, in a guarantee and guarantee provider, as well as credit and insurance support.

Pekcan emphasized that it is Türk Eximbank's mission to increase the financing possibilities of the exporters and to control the risks that exchange rate fluctuations can have on the exporters and to offer new products. From May 288 Eximbank can make all loans. use in foreign currency, with the exception of rediscount credits it started.

Pekcan said that Türk Eximbank has provided the necessary tools to disseminate the use of futures to protect exporters against exchange rate and interest rate risks, to reduce the impact of interest rate fluctuations on the exporter and to increase the competitiveness of the potential shocks to strengthen the exchange rate.

In this context, Pekcan said that currency purchases and forward currency products were offered and that interest rate swap transactions were initiated from 9 July 2018.

Pekcan added that since 23 July 2018 exporters have been able to deal quickly with their pending claims by increasing the daily limit for rediscount credits from the CBRT.