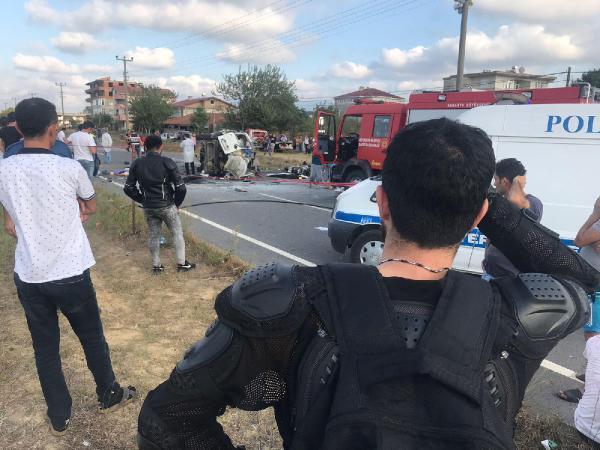 Attention for the Chiefs of the Documents
We know that the number of people who died in the accident is 7 due to the fact that the article entitled "Light Commercial Vehicle, Motorcycle Grippe: 8 Dead & # 39;

Aziz GÜVENER / SAKARYA, (DHA) – In the province of Kocaali in Sarkarya, the light commercial vehicle that got out of hand was hit by two motorcycles coming from the other side. In the accident in which the highway returned to the blood pool, 7 people lost their lives and 3 others were injured.
The accident, around 16.00, the district Kocaali came to the Alandere place. Akçakoca & # 39; then Kocaali direction, but driver can not be determined 81 KC 694 light commercial vehicle plate, went out of control and across the road. The commercial vehicle collapsed on the opposite 54 KS 659 and 81 DL 601 plate motorcycles. One of the motorcycles came on fire when he returned to the battlefield. In the accident, some people lost their lives in a disastrous way. Someone's head is torn from the body.
A large number of 112 emergency, fire-fighting and police teams were sent to the scene on behalf of the residents. In a short time it was discovered that seven people in the light commercial vehicle were killed by motorbikes at the wheel of health teams who were on site.
Kocaali District State Hospital was removed by ambulance injured 3 people. The wounded, who were in a serious condition, were referred to full-fledged hospitals in the area after their first intervention.
Because of the accident, the Kocaali-Akkoca highway was closed to traffic. A start was made on identifying the victims who lost their lives in the accident.