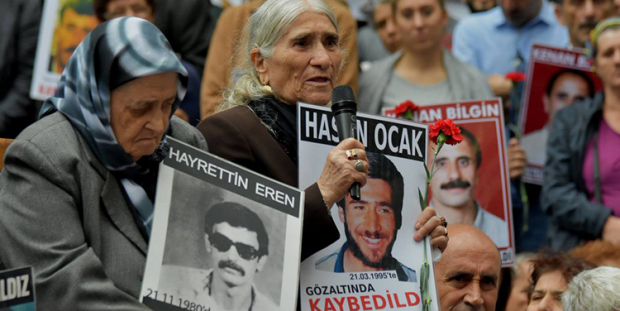 The 700th week of Saturday mothers was banned by the Beyoglu District Governorate. After the decision, activists who tried to gather on Galatasaray Square were subjected to police interventions. CHP Vice Chairman Gökçen Gökçen reported that about 100 people, including the CHP members, were taken into custody. From Saturday People Maside Ocak, Besna Tosun, Ali Ocak, Hasan Karakoç, Sebla Arcan, Leman Yurtseverde, Faruk Eren, and Gamze Elvan & # 39;the i have also learned that they belong to those who have been taken into custody. The detainees would have been transferred to Vatan Security after the health check at Haseki Training and Research Hospital. Minister of Internal Affairs Süleyman SoyluCHP vice call for Sezgin Tanrıkulu, the act itself is forbidden by the order of the Noble said.

often experienced disappearance cases in the early 1990s with coups in Turkey, was to become a priority of the fight against human rights activists. The Saturday mourning, which began in 1995 with the death of Hasan Ocak, who lost his custody at the age of thirty, changed to an echo throughout the country. Today, the intervention of the 700 police officers who wanted to do the action caused the reaction of the users to the social media.

Some responses from social media to police interventions are as follows:

Saturday mourning started in 1995 when Hasan Jan loses and is found at a cemetery in the cemetery. Now, 23 years later, while the January killers have to be found and tried, their mother, sister and their companions are taken into custody.

On Saturday morning they are 700 weeks out on the streets to find their sons, their family members, to learn about their fate and to ensure that their loss remains unpunished. Those who block the search for justice, those who protect the guilty, are the guilty partners. # In cumartesianneleri700haf

"Saturday Mothers", the actions of 700 "nc week in dağıttır who were detained and those who care, it means that they do," disappearances in custody in Turkey, "are exposed the cause bearded mentality they belong to the world # In cumartesianneleri700haf

# In cumartesianneleri700haf This struggle is long and honorable for the political life of all these commanders. Do you have one reason to respect these things and what you believe in after you have seen and silenced and supported them? pic.twitter.com/1hsntwwt3l

Saturday mothers, who had promised 6 days ago that Erdogan had accepted himself at his office, have apparently become a terrorist today. # In cumartesianneleri700haf pic.twitter.com/tshylcsoc0

700 weeks to see the true face of the state the #cumartesiannethey will continue to search for their saved lives every week of their lives, despite all the pressure and violence. Mother tongue is stronger than state violence!