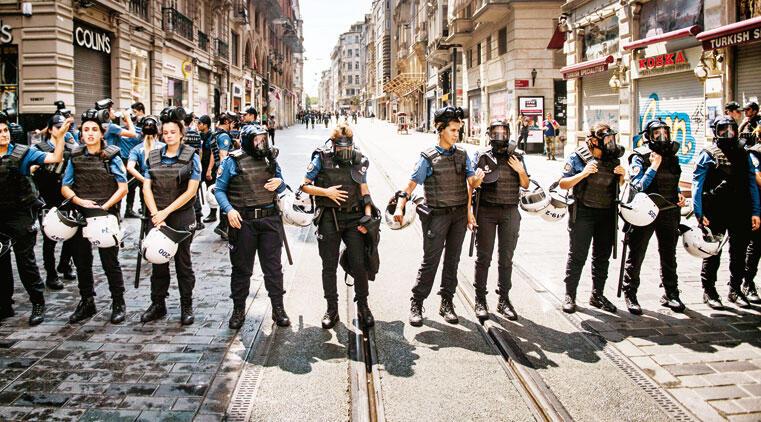 SATURDAYS MUNICIPALITY, Galatasaray square in 700th place, while the Governor of Beyoğlu prepared for the police teams, announced that the action is forbidden. The policemen made an announcement and asked the crowd to spread. Saturday's negotiations with the police officers were not decisive, police officers intervened. The first intervention by police officers was done by Hasan Ocak's brother Maside Ocak, his brother Ali Ocak, Besna Tosun, daughter of Fehmi Tosun, Hasan Karakoç, Rıdvan Karakoç & # 39; s brother, Sebla Arcan, Leman Yurtseverde, Faruk Eren , Berkin Elvan his older brother Gamze Elvan was held. Hasan Ocak's mother, Emine Ocak, was taken over by the police and released on the reactions. At the end of the day the number of arrested persons reached 47. Emine Ocak, drowned in tears, said: "Why are they involved with us? Why do not my children touch? Do not do it." When Brother Hayrettin's brother Eren, Faruk Eren was arrested, he said: "I came here looking for my brother, I will not leave until I have found my brother."

Ahmet Şık and Hüda Kaya sat across from TOMA with a group accompanied by events. As he tried to save the police, Ahmet threatened to crush Şık. The deputies then made a statement on Galatasaray Square. Sezgin Tanrıkulu said:
"The police said the ban was imposed by the district governor.On Saturday Annelies are looking for the fate of your children for 700 weeks.The intervention I made is in my opinion a wrong game and cruelty. missing mothers, aged 80-90, some were taken into custody, and prohibition made far more impact than the action, "he said.

KILIÇDAROĞLU: SOMMIG VIOLENCE IN THE VIEW, MORAL, MUST BE IMMEDIATELY

CHP leader Kemal Kılıçdaroğlu answered questions about police interventions on Saturday, Anneler: "I had a deep sadness when I heard about it, what do these mothers want? They want to know where their tomb is for 700 weeks." Anneler says, "Find your grave, Give us your bones, let us go to your grave, read a prayer. "These mothers also spoke to Sayın Erdogan during the Prime Minister's period, none of which was fulfilled, I must understand the mines. put, bathe with coffee, peppermint gas … There must be a little conscience, morality, belief in the world, a part if you need it, there is none of it, you do not find it, your handicap is bigger than you guilt, and you're trying to divide the mothers by force, these mothers have not hurt anyone for 700 weeks, a state can not be ruled so badly, there are only such events in the dictatorship. & # 39;