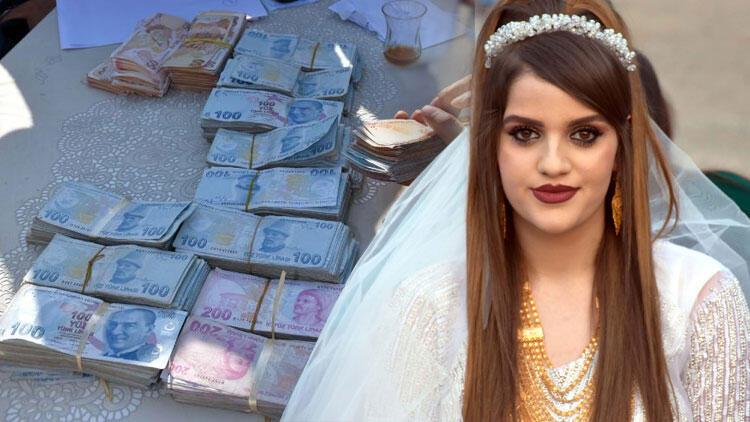 At the wedding guests gave a double 450 thousand pounds and the bride had about 1 kilo of gold jewelry. Germany, Switzerland, Iraq, Belgium and Iran also took part in the wedding, drone was shown.

Elin Adiyaman, son of Lezgin Adıyaman, who was a candidate for AK Party's Sirnak deputy and who lost his life after the heart attack last year, was married in Beytüşşebap, daughter of Tahir Adıyaman, the leader of the Jirki tribe. tribe, at the general elections in 2015. Almost 5 thousand guests, including the invited guests from Germany, Switzerland, Iraq, Belgium and Iran, attended the wedding of Elay Adiyaman, the groom, who is also the head of the AK Party Şırnak Youth Branch and Şeyma Adıyaman for 3 days and 3 nights. Beytüşşebap Governor Murat Şener, 8th Commando Regiment Commander Colonel Tahsin Saruhan, District Policeman Oğuz Olgun, Chief Public Prosecutor Oğuz Yilmaz, representatives of political parties and non-governmental organizations and numerous tribal chiefs took part in the party. At the wedding, men and women, with gold jewels and colorful local outfits, spent a long time in the accompaniment of the songs.

REACTION OF EURO AND EURO

Jirki, re house, the Giravy that Mamhur and Goan tribal leaders, sanctions the United States against fluctuations and in foreign currency for Turkey, the bride and groom dollars and euros¡¯s instead gave its members instructions on how to install Turkish Lira . Chiefs and members of this, a double wedding gift as a Turk Liras. It was learned that other guests wore the Turkish lira during the ceremony. The guests, who are shown with the drone, donated double 450,000 pounds and 1 kilo of gold jewelry to the bride. It was stated that for the wedding 50 sheep and keçin had been cut and 1 ton of rice had been used.

Mehmet Adyaman, the uncle of the uncle who gives information about the wedding, stated that there is no title among the tribes and said: "I want to thank everyone who did not come to my nephew's wedding, I wanted my uncle's daughter Everyone knows that the tribes give a girl for the title, but there is no such thing here, my uncle gave him his daughter, he came and placed 5 thousand Turkish lira's on the dam and also sent 4 truckloads of dowry for 4 days. "he said.

Damat Elind Adiyaman recalled that his father Lost Adiyaman lost his life last year and said: "It is 1 year after the death of my father, his death was not the only one, but the laws of our fellow citizens of Beytüşşebap were strangled. friends are here now, because I do not feel my father's absence, I would like to thank everyone who does not come to me, I am very interested in meeting with the wedding, my relatives, my tribe leader, they are all very interested in this crowd together, "he said.