The power of your mother – Last minute news 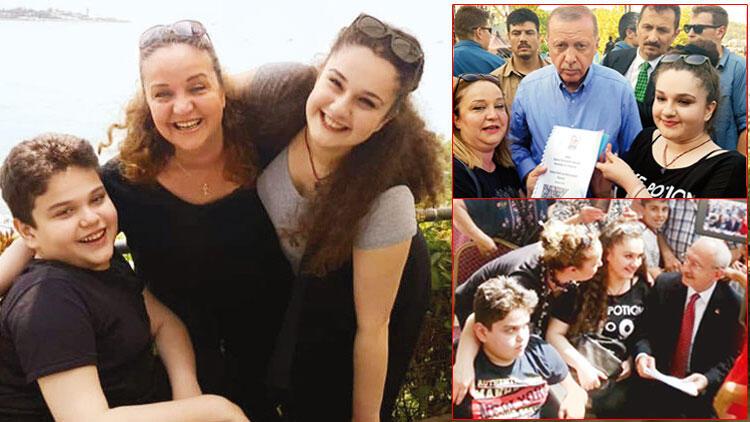 For a system with progressive neuromuscular diseases SMA drug at the end of 2016 was also produced great hope for patients and their relatives in Turkey in the United States approved. Families are very expensive, but effective drugs that are struggling under the SSI should be applied to patients in Turkey. However, SSI only covers SMA type 1 patients for medication reimbursement. Type 2 and 3 patients were excluded.

Arzu Uz Sahin (48), & # 39; two childmother of SMA type 3 & # 39; Kiz Ayça is 21 years old and studies molecular biology and genetics as a scholarship student at the University of Koç. His son Burak Can is 16 years old and lives in a wheelchair. Burak Cana was arrested for 20 months after the SMA diagnosis was started. In fact, Ayça had walked to his fingertip at that moment, but the expert had not guessed it. Because the disease was genetic, Ayça was also tested and SMA was diagnosed when he was 4.5 years old. After identification, the Sahin family organized their entire lives according to them. TV spiker mother Hawk, stopped working to take care of their children. Mother Falcon, who started fighting for two children and other patients who were waiting for medication, said:

"We have tried to prevent the problems that we have been roasting in our own oil so far.The medicine was also hope for us We follow the patients who use the world My son has a worse disease She could walk for up to six years ago, now in a wheelchair, we expect all diseases to be given without discrimination on the basis of age and type of illness.

"Our sons are coming, I told this to the President of Turkey, Recep Tayyip Erdoğan, whom I met in Parliament on January 29 and before the Sariyer meetings on June 22. I gave you the file we had prepared. I also met Sümeyye Erdoğan and Bilal Erdogan, listened carefully, I also had the opportunity to talk to the Minister of the Interior Süleyman Soylu, no one I did not talk about, I also reached Kemal Kılıçdaroğlu and told him several times. Meral Akşener wanted information, we sent the file, he said it in his speech, mine is the power of your mother. & # 39;
Şahin, who continues to fly between Istanbul and Ankara and continues to discuss the issue with all relevant authorities, said the Ministry of Health and Labor, the Ministry of Social Security threw the ball together and said: "We have made the foreign drug application form a second The first was rejected, the total of all types in Turkey 700-800 SMA think we have found it is enough to satisfy the power of the Republic of Turkey I promised my children after the drug was approved in the USA and the EU, so the treatment would come true.Prants were given the first SMA type 1 because of their urgency, but types 2 and 3 are constantly changing. "

Spinal muscular atrophy (SMA), a group of hereditary neuromuscular (nervous and involuntary) diseases. Some cells in the spinal cord that are responsible for the movement of the muscles are sick and unable to perform their duties, resulting in this disease. The dose of SMA medication is 125 thousand (about 750 thousand pounds) in the United States, 90 thousand euros (about 630 thousand pounds) in Europe. 6 doses in the first year and 3 doses per year in the following years. Another effective treatment is applied for a life long enough to be found.

ABOUT THIS MEDICINE OF OUR LIFE

Ayça, who is still struggling with the ANNELERIE, meets politicians and his brother Burak Can also shares video 's and video' s on the social media. Ayça Sahin, says: "I have always kept my illness until the medicine came out.I have been talking since 2016. While our seniors take medication in Germany, the United States, Spain and many other countries, we can cure every day, too even though it is possible Some of us are approaching death I promised myself, my brother and all sickness I will never argue I got an acceptance from Finland for ERASMUS But I am not going My illness is progressing, it is getting harder To balance and climb stairs, Finland is a snowy and icy country, afraid to skim, to fall, to break my hip, and while I could get 4 loading doses of medication, my muscles could be strengthened and I could go safely. our health, our right to life. & # 39;