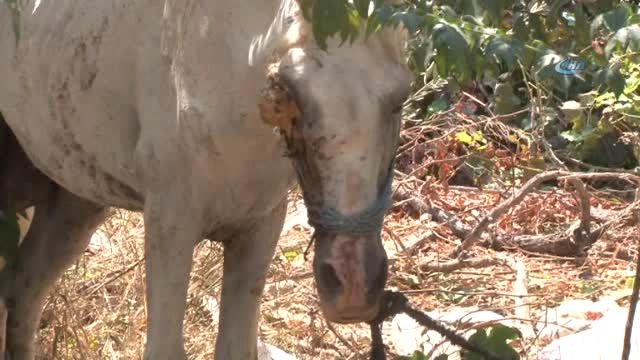 Policeman for a tortured horse
Adana & # 39; da hunger and thirst torture made the police gave $ 3 water turned compassion
The miserable horse was taken to the Adana Metropolitan Municipality Animal Barn and treated

ADANA – Adana was hungry and thirsty and tortured, the police gave 3 buckets of water and showed compassion. The miserable horse was taken to the animal shelter for treatment.
According to the information obtained, the event took place in the vicinity of the city of Seyhan Türkocağı. According to the allegation, the citizens of the river Seyhan near the garden of a building in the ruins of the deceased, aware that the horse is in the inflammation of the horse, immediately informed of the police. After he saw the policeman coming, he checked if there was someone in the building. However, it is understood that no one has been informed to the authorities of Adana Metropolitan Municipality Animal Shelter for the treatment of throat.
Incidentally, it was seen that the horse was infected because of the torture of his right eye. In addition, horses were hungry and thirsty for days on end, and it was thus noted that they were in a standing position and weakened. The police brought 3 buckets of water to the animal and drank it with their own hands. After a while the shelters came and took the horse. It was learned that the vision of the horse was completely inflamed, dangerous to be blind. Meanwhile, attention was drawn to the intense blood stains around the horse.