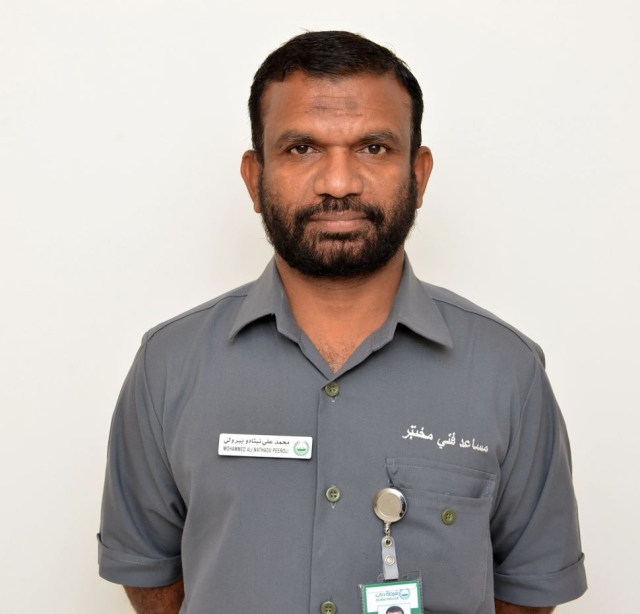 The investigation and testing of firearms used in armed crimes and killings play a crucial role in uncovering the conditions of crimes and arresting them. It is necessary to use the latest technologies and software to study evidence in place of crime and above all to think creatively. .

Mohamed Ali Pirouli has, despite not having completed his education, obtained a patent by inventing a device capable of testing the validity of the various recordings within minutes, without the need to provide a weapon to test the bullets.

Mohammed Ali is a technical assistant at the Department of Antiques, Weapons and Machine Inspection at the Department of Forensic Evidence in the Department of Criminal Law and Criminology at the police of Dubai and found the ideal environment at his workplace to invest his talent in opening locks and vaults. without breaking or damaging them. The inventive place to unleash creativity and innovation, with simple available capabilities and tools, reached a patent that shortened the effort and time from days to minutes that were sufficient to detect the validity of the firearms used in the crime.

"If we do not have the right weapon, we individually take the ignition test and gunpowder, remove the gunpowder from the bullet and ignite it.If it burns, it is suitable for use and then comes the ignition test. like a pair of pliers, so that the contact starts at the top,

And then manually the methods by pulling a needle part of the device to place the renegade on the ignition system, wearing protective gloves and a mask on the face to prevent injury, if a strong sound, the ignition initiator is suitable for use.

Mohammed Ali stressed that his new invention does not require weapons to test the shots, explains the nature of his invention, and says: "With the help of simple tools, I have made a circular device corresponding to different shots" bullets ", and in the edge of the ring device a hammer was installed at the end "needle" To test ignition initiator as in the old conventional machine, after you have put the picture in the right form under the six forms, you put a plastic box over the ring device so that the hammer from the box remains through a hole in it. "

"It is sufficient to choose the correct template for the shot and place it vertically, so that the ignition is at the top, and then rotate the device to get the photo just below the needle, and then place the plastic box, and we manual To process roads from outside the box to test the validity of the recording.

Mohammed confirms that his invention has contributed to shortening the time needed to test the recordings from a few days to a few minutes, and the device makes it possible to test the different shapes and types and sizes of recordings without weapons. to deliver, and the research is safer than the past, and enough to wear gloves, glasses and sleeves from the time precautions were taken.

Mohammed explained that in a number of cases the apparatus was used by the Department, exceeding the number of 37 cases, and the invention succeeded in carrying out the tasks entrusted to him, noting that his work on the invention lasted for three months, and cost of about 300 dirhams, Stainless steel.