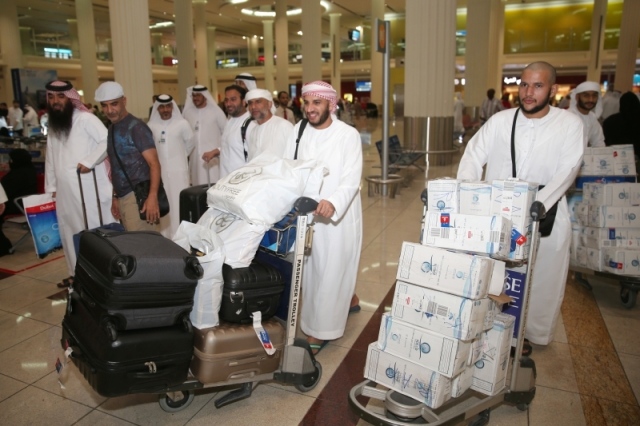 The UAE airports received yesterday the first of the UAE pilgrims with flowers and gifts in a festive atmosphere, and their procedures were easily and easily completed, which gave them comfort and happiness.

Hundreds of pilgrims arrived at the Abu Dhabi International Airport from the Holy Land and emphasized that this year's pilgrimage was successful by all standards, while appreciating Saudi Arabia's efforts to take all measures and all obstacles for pilgrims. overcome. The house of Allah.

Abu Dhabi International Airport has received three flights from Jeddah airport with the first pilgrims of the Hajj and Umrah campaigns in the UAE. The first flight arrived at 8 am, belonging to Etihad Airways, followed by a second flight at 1:30 pm, followed by a third flight to Saudi Air at 7:00 pm.

It is expected that the arrival of pilgrims of the state at various airports of the state today and tomorrow through various flights to the airline and Saudi aviation and private companies, while the official mission of the pilgrimage on Tuesday.

The pilgrims of the state who would like to spend the Hajj easily and easily this year, appreciate the great attention given by the wise leadership of the pilgrims of the state, and emphasize that the care and care provided by the official mission of the Hajj and his various committees were informed excellent and a high degree of responsibility and dedication were, The satisfaction and happiness of all pilgrims.

Retired pilgrim Mohammed Khamis al-Junaibi, one of the pilgrims who arrived at Abu Dhabi airport, said that this year's pilgrimage was one of the most successful and best seasons in terms of organization and freedom of movement in the holy places. And organized laws that contributed to the success of this season.

He appreciated the sharpness of the wise leadership to facilitate the tasks of the Hajj mission and to provide all necessary necessities and enable them to carry out their assigned duties and ensure the comfort and tranquility of the pilgrims while they are in the Holy Land.

For its part, Hajj Saqr al-Hammadi praised the official mission of the state to meet all the needs and requirements of the state's pilgrims and provide them with many problems, especially with regard to choosing the right time to throw stones. and avoid the crowded areas and provide the luxury housing at the Haram in Mecca and Medina. In addition to providing good food and providing health services in all phases of the Hajj.

Al-Haji expressed his appreciation and thanked the Saudi authorities and the security forces who provided the comfort of the pilgrims and provided them with all the needs, emphasizing that the Saudi Ministry of Hajj and Umrah have made great efforts to bring pilgrims to all the holy places. to facilitate.

Haji Abdu Ali Al-Hajri said that Saudi Arabia has made great efforts to come out with a successful pilgrim season, and not limited to the pilgrims, he pointed out that the official Hajj mission was with them and the health and security situation of all pilgrims in the country.

Haji Abdullah Jassim Al-Breiki said the campaigns in the UAE were one of the best pilgrimage campaigns in terms of delivering quality and distinctive services in the areas of housing, mobility, security and food, noting that the Kingdom did not shorten the guests of the Rahman.

The Dubai Airports received yesterday the first pilgrims from the Holy Land in a festive atmosphere blessed with their rituals and congratulated them with their safe return to the country of the state, at a time when pilgrims at the high level of services of the campaigns and the official mission diligently perform them during the execution of the duty and facilities for the mass and persecution To ensure their safety and facilitate the pilgrimage, including the services that Saudi Arabia offers them.

Mohammed Al Marzouqi, chairman of the Hajj and Umrah Commission on Dubai Airports, said the commission provided all necessary services to facilitate return procedures, including the allocation of counters, baggage belts for overcrowding, the addition of a booklet and electric car. ; s to avoid the door of the aircraft. In addition to special places to water Zamzam, and a team dedicated to accelerating the delivery of water to them, to speed up the departure of pilgrims.

He pointed out that the various parties participating in the Hajj and Umrah Commission in Dubai have formed task forces to address all aspects of the return of pilgrims, particularly Dubai Airports, Dubai Police, Department of Residency and Foreigners Affairs in Dubai, Dubai Customs, The Dubai Ambulance Foundation. And the Department of Islamic Affairs and Charitable Activities in Dubai, pointing out that all these agencies sent their representatives to receive returning pilgrims, and the distribution of gifts on them, such as roses, koran and perfume.

He added that everything that had to do with the pilgrims was easy, and that the procedures of passports were completed very quickly according to the procedures set up by the Department of Residence and Foreigners Affairs in Dubai, and all support teams are available day and night. to facilitate the exodus of pilgrims to their homes without exhaustion. Or fatigue added to them after their holy journey.

He added: "We have provided guide plates in the Arrivals Hall to introduce pilgrims to baggage shafts and Zamzam water, and to facilitate the relocation of family members and future pilgrims, as well as the formation of a team of operations around the clock to Helping pilgrims: Emergency services for pilgrims returning to the airports of Dubai via medical staff who work day and night with the necessary equipment, especially diabetes and blood pressure. 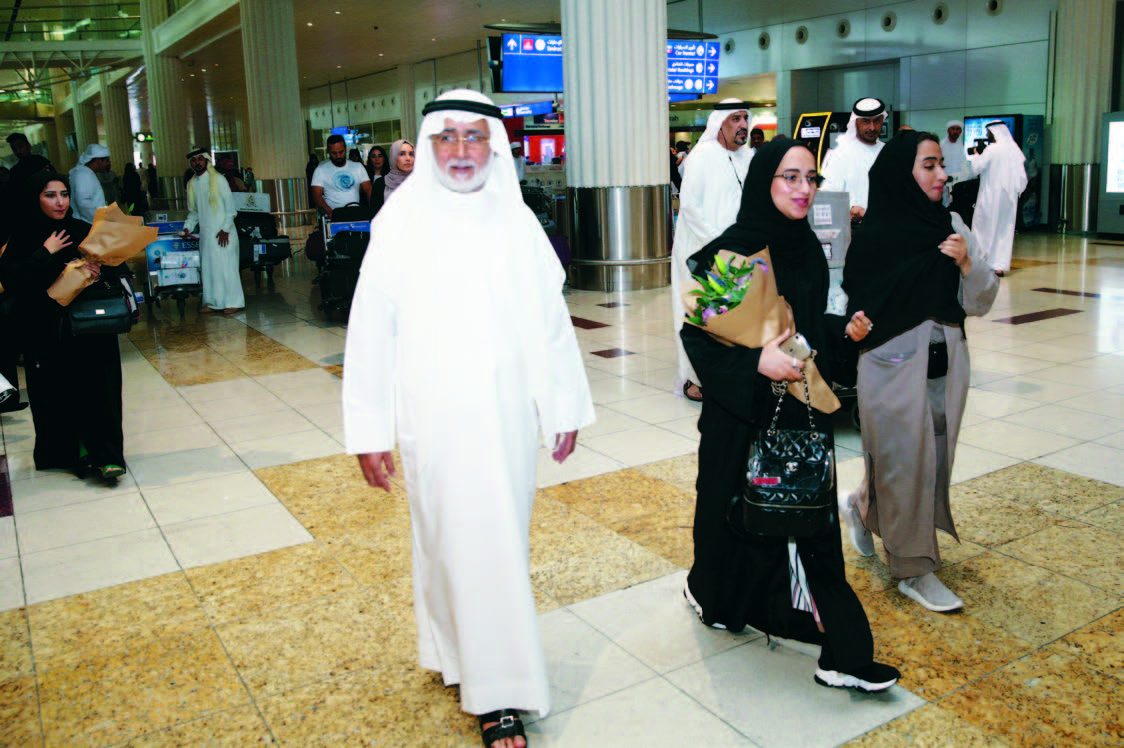 The Sharjah airport yesterday received the first batch of pilgrims returning to the country after performing pilgrim rituals, which were on the flights from Jeddah, Medina and Taif in Saudi Arabia, and the airport expected the influx of pilgrims during this period by regular and irregular flights to Sharjah.

The Sharjah Airport Authority has taken all measures to facilitate pilgrims 'access, including coordination with all airlines and airport operators to speed up their arrival procedures and facilitate pilgrims' travel procedures to their countries and provide all the facilities for them. And their families in the lobby.

Ali Salem Al Madfa, president of Sharjah International Airport Authority, congratulated the pilgrims for the safety of return and pointed out that Sharjah Airport has taken all measures that have helped to alleviate pilgrims by speeding up procedures while maintaining the highest level of services and facilities, especially for the elderly.

Sheikh Faisal bin Saud Al Qassimi, director of Sharjah International Airport Authority, said that the airport continually adjusts and develops its services in line with the continued growth in the number of passengers.He pointed out that the traffic of departure and return of pilgrims this year easiest and easier as a result of the services offered.

The general management of the Sharjah police also participated in the organization of the reception of pilgrims who returned to the country via Sharjah International Airport through a number of representatives of its departments, including the community police department, the department of ports and airports, the department of media and public relations that were present in the lobby, 8 electronic gates and 15 regular ports to facilitate access, so that access takes only three minutes.