Extinguishing fire in the Corniche tower of Ajman 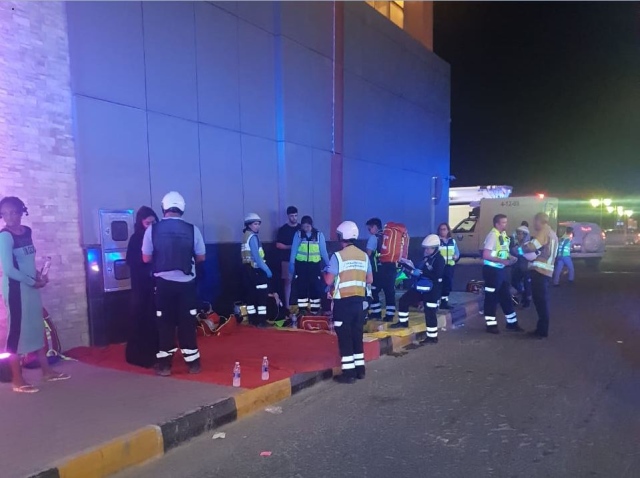 The civil protection staff in Ajman succeeded yesterday in a fire in the climate chamber of a residential tower on the Corniche of Ajman to deaf and immediately evacuate the entire population of the building until the end of the incident.

Brigadier General Abdulaziz Ali Al Shamsi said that the Ajman Civil Defense Platform received a report last night that there was a fire in one of the residential towers on Ajman Corniche.

He explained that the fire broke out in the climate room on the 26th floor and caused the burning of air conditioning generators and the spread of smoke on the same floor and several other areas in the tower, 19 people were exposed to smoke inhalation and 13 cases were treated by the National Ambulance on the site The incident involved the transfer of five moderate cases of elderly and a child to the Sheikh Khalifa bin Zayed Al Nahyan hospital for treatment.

He added that the fire was controlled immediately after the arrival of the teams and prevented them from reaching the rest of the tower, and evacuating the building from the population and cooling the fire to prevent a fire, adding that the delivery of the site to the competent authorities to complete the rest of the procedures and the return of normal to the residential tower.

Al-Shamsi demanded from the owners of commercial residential towers to meet the requirements of preventive safety, including ensuring the safety of electrical installations and periodic inspection and supplying fire extinguishers, installation of smoke detectors and self-extinguishing residential buildings, to reduce the fires. avoid and maintain the safety of residents.