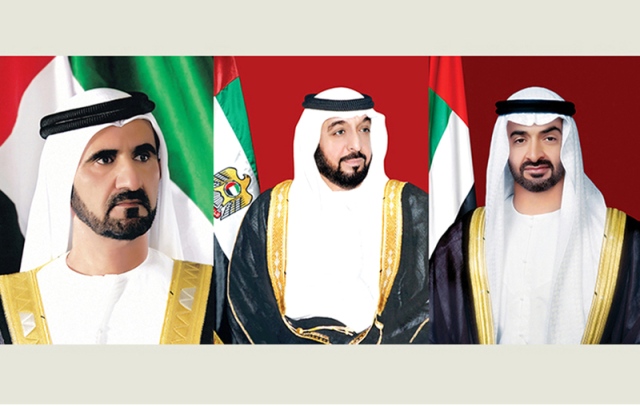 His Highness Sheikh Khalifa bin Zayed Al Nahyan, president of the UAE, congratulated the kings, presidents and princes of the Arab and Islamic countries on the occasion of the Eid al-Adha, wishing for health and happiness and their peoples more progress and prosperity and our Arab and Islamic nation.

His Highness Sheikh Muhammad bin Rashid Al Maktoum stressed that the pilgrims who stood on the day of Arafah and united the hearts of Muslims from all over the world witnessed the unity of all of us in a historical, cultural and religious sense. He added in his Twitter blogs that the celebration of Eid al-Adha confirms this unity.

At the end of his congratulations, he wished that the Almighty returned to the people of the UAE and all Arab and Islamic peoples, the festival of good and blessing. He said: "The pilgrims are standing in Arafah today and unite with them the hearts of Muslims from all over the world to witness the unity of all of us historically, culturally and religiously." We all celebrate tomorrow, Eid al-Adha, to confirm this unity. And every year and you and your family all the best ».

HH Sheikh Khalifa bin Zayed Al Nahyan congratulated His Highness Sheikh Khalifa bin Zayed Al Nahyan on the occasion of Eid Al Adha and expressed his sincere congratulations and wishes to His Highness the President of the UAE on this blessed occasion and called upon the Almighty God to give them to recover from His Highness with health and well-being. Happiness, and remain an asset to the homeland, a sponsor of his blessed journey, and enjoy more progress and prosperity in our country.

His Highness Sheikh Muhammad bin Rashid Al Maktoum and members of the Supreme Court congratulated the rulers of the UAE, His Highness the crown prince and the deputies of the rulers and the people of the United Arab Emirates and the inhabitants on their land during this blessed occasion.

On this occasion HH de Amir congratulated the loyal sons of the UAE who are heroes of our forces in the field of truth, duty and humanity.He called the almighty God to show their respect and support and preserve them and our martyrs to be merciful.

"We congratulate the head of state, his deputy, the rulers and the people of the UAE with Eid al-Adha and ask God to bring him back to the land of happiness with blessings, blessings and prosperity."

"On the occasion of Eid al-Adha, we congratulate the kings, presidents and princes of the Arab and Islamic countries, wish them good health and happiness, and their peoples further progress, prosperity and prosperity.

He added: "We congratulate our forces on the occasion of Eid al-Adha. We ask the Almighty to protect them and to make good their sins and to be merciful to our martyrs who have presented the best images of sacrifice and patriotism. "

Sheikh Mohammed also exchanged congratulations on the occasion of Eid al-Adha – during telephone conversations with the Guardian of the Two Holy Mosques King Salman bin Abdulaziz Al Saud of Saudi Arabia, Sheikh Sabah Al-Ahmad Al-Jaber Al-Sabah of Kuwait and King Hamad bin Isa Al Khalifa of Saudi Arabia. Bahrain, King Mohammed VI of Morocco, King Abdullah II of Jordan and President Abdelfattah Al Sisi of Egypt. His Highness has brought the best congratulations from His Highness Sheikh Khalifa bin Zayed Al Nahyan on this blessed occasion, wishing them good health and happiness. G Almighty to give it back to them and to their people and their countries sister further progress, security and stability.