Launch of the vehicles of the Traffic Accident Unit in Dubai 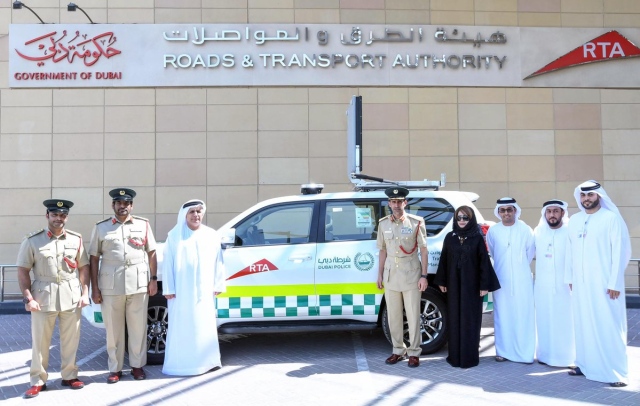 Matar Al Tayer, General Director and Chairman of the Board of the Authority for Roads and Transport (RTA) and General Abdullah Khalifa Al Marri, Commander-in-Chief of the Dubai Police, opened the vehicles of the Traffic Accident Management Unit, which carried out the pilot operation yesterday Sheikh Mohammed Bin Zayed Road started for a period of about 70 km with a year.

This is an extension of the strategic partnership between the Road and Transport Authority (RTA) and the Dubai General Police Command, which is based on the establishment of an integrated business system that supports the Emirate of Dubai's vision and the completion of the operational plan for the road safety strategy, which is in line with the strategic plan of Dubai and the road safety plan. In which the stability and the foundations of development in the preservation of life and property predominate.

Al Tayer and Al Mari inspected a unit for the management of traffic accidents equipped with modern technical equipment such as screens, communication devices, electronic signs and other vehicles. The vehicles will be located at five locations on Sheikh Mohammed Bin Zayed Road. Each vehicle covers 13 kilometers away. Sheikh Mohammed bin Zayed within a period of 10 minutes.

The unit will deal with inactive vehicles and take rapid action to manage traffic accident sites at the scene of the accident and on adjacent roads and to deal with minor accidents that do not require police presence, the removal of ordinary vehicles in traffic accidents, stationary vehicles, normal traffic and damage assessment of infrastructure and accidents. Reporting and implementing traffic transfers on the spot and in the network of surrounding roads, assistance to road users, support and support of the Dubai Police at the time of the accident, protection of parked vehicles and traffic support during the events.

Al Tayer said that the Traffic Accident Management Project, which is the result of the strategic partnership between the Roads and Transport Authority and the Dubai Police General Command, is aimed at accelerating the removal of ordinary vehicles in small road accidents or road vehicles. disrupting traffic congestion, regulating road traffic and shortening the elimination time. In addition to preventing secondary accidents due to the sudden congestion, he pointed out that the road Sheikh Mohammed Bin Zayed was chosen because of traffic density, especially during rush hours and the increase in the number of less serious accidents and vehicles. Off-road.

Al Marri praised the strategic cooperation between the Roads and Transport Authority (RTA) and the general command of the Dubai Police and the cooperation and coordination of traffic management and traffic control for the benefit of the citizens and residents of Dubai. He pointed out that the operation of the traffic accidents department in Dubai is an extension of the strategic partnership between the two parties. Based on the establishment of an integrated business system that supports the future visions of the emirate of Dubai.

It should be noted that the extensive studies of traffic accident management in the Emirate of Dubai have shown that the number of vehicles disrupting the roads is estimated at 250,000 vehicles per year, while the number of minor road accidents is around 200,000 accidents per year.

The studies confirmed that the road crash management project will contribute to shortening the time for evacuating small incidents by 35% and reducing congestion and associated costs by 25% and reducing the number of secondary accidents.