Mohammed bin Tahnoun: The principles of Zayed remain in the conscience and generations of generations 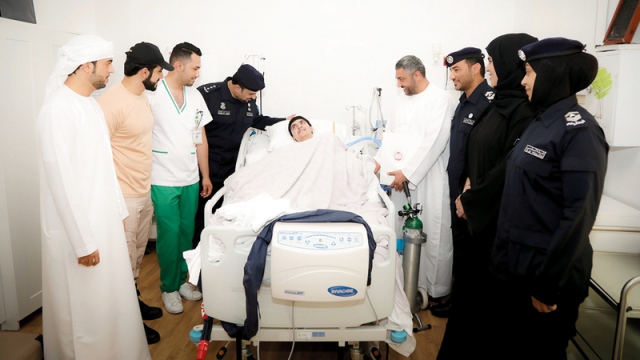 Abu Dhabi Police distributed gift baskets to patients and owners, especially children in the Amanah Health Care Hospital in Khalifa City, Abu Dhabi, as part of the World Humanitarian Day, which falls on August 19 each year. General General Sheikh Mohammed bin Tahnoon Al Nahyan Director of the Security and Ports Affairs sector, stressed the importance of paying attention to human values ​​and their impact on the success of societies, in accordance with the values ​​of human construction and the noble principles of the late Sheikh. Zayed Bin Sultan Al Nahyan, may God let his soul rest. For his heroic deeds and his gifts he had D to all parts of the world.

He emphasized the sharpness of the Abu Dhabi police to actively participate in the activities of the international day for humanitarian action.

The Abu Dhabi police wants to dedicate the values ​​of giving and tolerance to the values ​​of giving and tolerance, in recognition of the role of the late sheikh Zayed Bin Sultan Al Nahyan, in setting up the humanitarian process in the UAE, Good "in building people, sustainability and patriotism The Director General of the Department of Weapons and Explosives in the Security and Ports sector, Brigade Salim Hammoud Al Balushi, said that the International Day of Humanitarian Action is important to everyone because it is the fruit and their families and hospital staff to establish a culture of volunteering and humanitarian aid and to strengthen an effective partnership with humanitarian institutions, thereby increasing solidarity and community values.

The event, organized by the Department of Weapons and Explosives, with the cooperation of the Ambassadors of Happiness in the Abu Dhabi Police Security and Ports Sector, included a number of programs & # 39; s and various departments, attended by patients and their families, and the medical and administrative organs of the hospital. Schoten attracted attention from viewers.

Gift baskets have been distributed to hospital staff, due to their dedication to providing humanitarian services, within the sharpness of the Abu Dhabi police to improve and value the employees and their humanitarian role.

The patients, their families and the staff of the hospital expressed their deep appreciation for the initiative of the Abu Dhabi Civilization Police, which shows the basis of the good emirate and its coherent unified approach, in line with the work of Zayed Al Khair, and the root of his humanitarian reputation. Place. A number of officers participated in the celebration and described officials, individuals, women and employees in the security and port sector in the Abu Dhabi police.