uae January 2, 2019 uae Comments Off on Abu Dhabi welcomes 2019 in an atmosphere that entertains young people before the big one 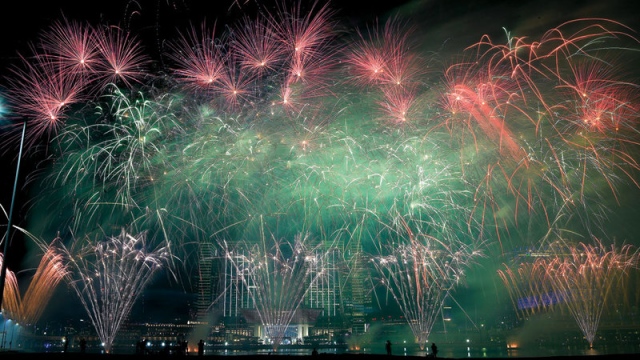 Abu Dhabi received a concert last night in 2019 on the island of Al-Mariya, in which the two stars, Miriam Fares and Amr Diab, came together and ended with a huge fireworks show around the sky of the capital of the UAE to a dazzling painting. .

The concert took a long time to open the concert, which lasted five hours, so that it could enter the pedestrian zone of the shopping mall. While most of the attendees were out of the ground until the ceremony began, large crowds gathered outside while awaiting the opportunity to enter the hall. .

The meeting of the artist Miriam Fares was characterized by her audience after her return from the period of her illness, which for almost eight months did not receive the patronizing of the film "Queen Theater tears" that flowed with the reception of the audience, and responded on her appearance on stage, preceded by a documentary film that summarizes Fares' career and her dream. From childhood on, "a dream that was achieved, and almost to return to a dream" after the illness struck her.

The Lebanese singer expressed her good fortune to receive the New Year in the UAE and the capital of Abu Dhabi, and emphasized the joy of having a large number of children attending their families before the ceremony, noting that she too was her son " Jaiden "accompanied.

During the ceremony Miriam Fares presented a large number of her songs, exchanged conversations with her audience between each song and asked the audience to participate in the performance of "Miriam Chaling", a challenge to introduce a dance movement that famous is for the artist.

Among the songs she gave: Kholani, Atallah and myself, I tell her, and the joy of her journey and her new song, Qumi, to conclude her paragraph, which lasted about an hour and a half. She thanked her audience, who brought her life and happiness, according to what she said.

«A few words .. Lots of singing» .. It is characterized by the paragraph presented by the star Amr Diab, which started at about ten and a half, and before the rise of Diab on stage the shouts of his audience, which long waited called the title of the famous "plateau", Diab was so lively that it looked like a match between the artist and his audience to sing, and moved between old and new, but the old songs had most of the paragraph. When Diab the first word of the song preceded by the audience to complete, he continued this harmony between the artist and his audience until the last minutes From 2018, before the fireworks to be launched For the air of the capital to a painting impressive.

Diab said he was happy to receive the New Year in the UAE that he loved and loved by all Egyptians, and his presence in Abu Dhabi that impressed everyone with their annual specials.

The star Amr Diab did not bother the audience during the ceremony, especially when he was about to sing the song "You are arrogant" from his new album. Then he stopped to view a number of songs he made during his trip. Like the series, which can be a reaction to a number of visions that the song considered a projection of a certain character, and criticized a number of him and the poet-poet Ayman Bahgat Qamar, and during the revision of these songs, responded Diab funny, including "And connected De", and in another response to the lyrics of the song said: "I said, sing, we do not murmur." For his part, the audience also had comments, such as the question about artist Dina Sherbini , and other comments that interest them in all details related to the & plateau & # 39; reflect.