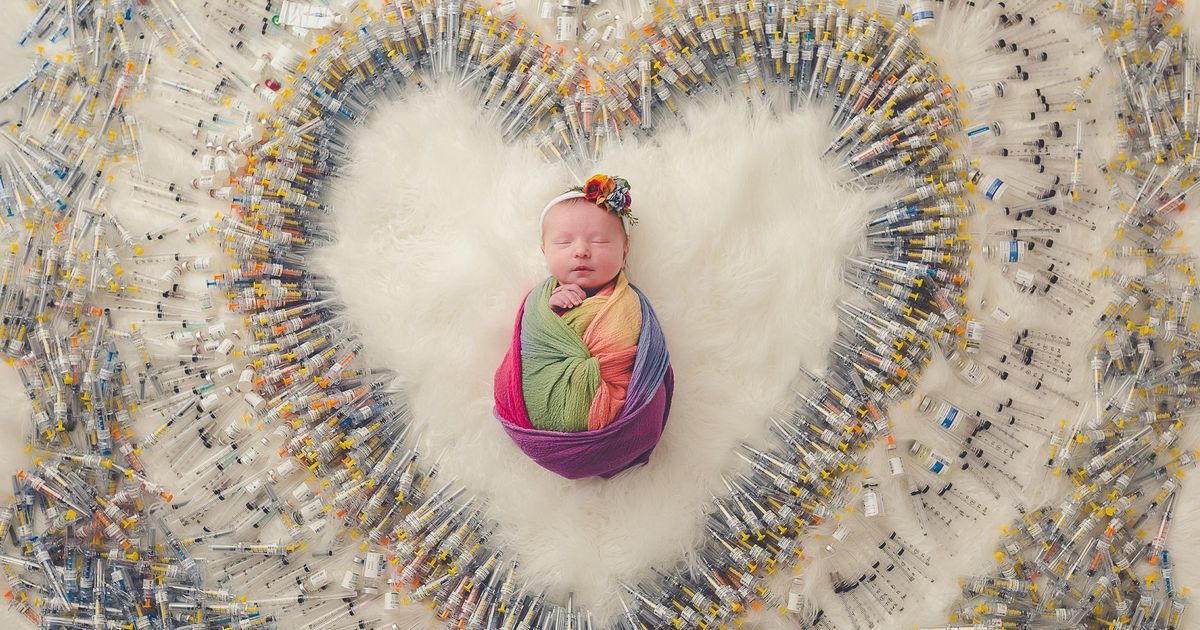 When a couple of the same sex in Arizona got a baby after years of IVF treatment and a number of miscarriages, they decided to celebrate the birth of their child with a picture that enveloped the journey of their family.

The photo, made by Samantha Packer, from Packer Family Photography, shows the newborn baby of Patricia and Kimberly O & # 39; Neil surrounded by hundreds of needles in the shape of a heart.

The couple, who married last January, had tried since 2014 to become pregnant. Kimberly told Sky News that they spent $ 40,000 (£ 31,260) and made seven attempts to get pregnant at this time, causing three miscarriages and two rounds of sadness. Intra-uterine insemination (IUI), before recommended IVF, according to Sky News.

The third miscarriage was particularly difficult for the couple because they had heard the hearing of their child and knew the sex. Patricia told CNN: "We were excited, we had been inside for eight weeks and we knew it was a boy.

"We saw the heartbeat beating and then we went 11 weeks and the heartbeat was stopped." She said she was about to break by this time, but the couple worked through it to try again.

Patricia had already discovered that she has a blood clotting disorder, called Factor V Leiden, which may cause a higher risk of developing blood clots during pregnancy, but after the last miscarriage, they found a new doctor who recommended IVF. The doctor also discovered other factors that contribute to recurrent miscarriages, CNN reported, such as enzyme deficiency and inflammation markers.

The 1,616 needles on the photo represent the photos that the 30-year-old Patricia had to take every day, a combination of blood thinners, lovenox and progesterone, and which were kept by Kimberley throughout the process.

While Kimberly and Patricia thought that the photo would serve as a personal symbol of the years it took to have baby London, the photo is now shared more than 63,000 times on Facebook.

"We wanted to create a memory to remember the babies that we had lost and the incredible journey we had underway," Kimberly told Sky News. She said that she hopes that the picture can help in one way or another and inspire other parents who have trouble getting pregnant.

Other parents shared their own IVF fight. Mandy Fagiano placed a picture of her baby with the caption: "We were lucky enough to get pregnant during our first attempt with IVF, so we did not have so many needles, so I thought this would be a heart-rending picture!"