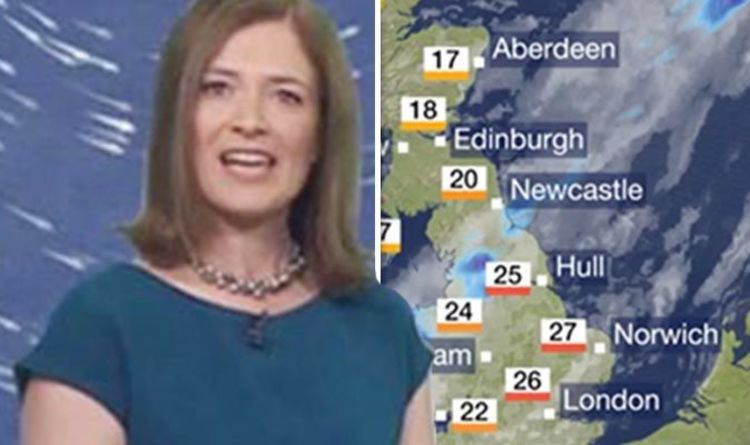 Wednesday is warm and sunny for a large part of the UK, with heat-sensitive heights leading up to the Bank Holiday weekend.

The best solar radiation is expected in the southern and central areas, where the temperature can easily rise to a burning 28 degrees Celsius today.

But there is bad news for northern parts of the UK, because the wet and stuffy conditions are likely to continue first this morning.

"But a bit divided over the country, because further to the north and west it feels fresher and we have some rain showers."

Today warm air from the Azores creates a subtropical breeze that will help push temperatures to the high teens in the south of the UK.

But at night and until Wednesday morning a fresh weather brought fresh air; as a result, it will feel cooler in the early hours of the day in Scotland and Northern Ireland.

A few downpours will also occur in Glasgow and Belfast, while in cities the temperature can rise to 16 or 17 degrees Celsius.

During the day the weather front will shift to the south, so there are some areas in the middle of the United Kingdom that will get cloudy with a few showers.

Although forecasters expect some rainfall, temperatures will rise in Hull, Norwich and London.

In the capital it could reach a boiling 28 degrees Celsius, while both Hull and Norwich reached the high 20s this afternoon.

Tomorrow the fresher air from Iceland will reach the British coast, causing the temperature to drop drastically.

There is also the chance of showers in the northwest of Scotland and the southeast of England.

Moreover, it is expected that the wind will pick up again, especially in the western parts of Scotland, where it is sometimes windless.

Friday will be another great day with sunny periods everywhere, but in the morning there are scattered showers in the western region.

Despite a few warm temperatures in the forecast, the bookmaker Coral makes the odds of 1/4 that the rain falls during the Bank Holiday weekend in London.

Meanwhile, this August is 3/1 as the wettest on record after a number of heavy rains last week.

Coral spokesman, John Hill, said: "Gambling suggests that we are facing a damp Bank Holiday weekend, but temperatures can go up to 30C.

"Although we still receive a lot of support this summer to end up as the hottest on a record basis."

BBC Breakfast is broadcast on BBC ONE at 6 o'clock on weekdays.