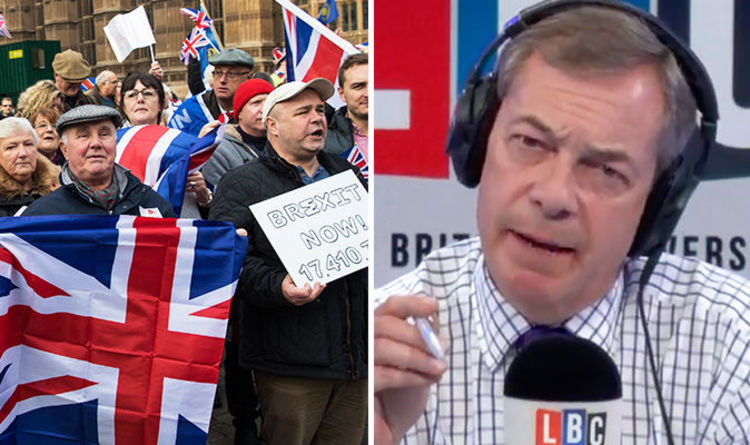 The furious radio-caller hit the People & # 39; s Vote campaign, which called for a vote on the latest Brexit deal, and said that Labor's supporters in the north of England are "against".

The People & # 39; s Vote campaign claimed Monday that a shift in labor policy to a vote on the eventual Brexit deal is inevitable.

Radio caller Richard, from Manchester, told LBC on Monday: "We'll leave the EU in March, is that correct?"

In response, LBC host Nigel Farage said: "We should be, Richard. Unless the popular vote and others get their way and we will not leave because we will have a referendum on the final deal. That is what they hope for. "

Richard joined the Remain campaign group and said, "That's what they hope, but it's fantasyland.

"Above are the Labor people, they are dead and they are very angry at the fact that these people are rummaging.

"17.4 million people voted for us to come from the EU, and this must be respected by both parties."

He added: "We are not taking this lightly here, I think the majority of people in the country and as a whole will stick to the decision of the referendum that 17.4 million people have voted. & # 39;

At the request of Mr. Farage about the problems the Labor party would face if it supported a second referendum, the caller said it would be "irreparable."

The furious caller said that the popular voice "does not even know what they do" and "plays with the feelings of people".

Mike Buckley, director of Labor for a People & # 39; s Vote, claimed Monday that Jeremy Corbyn "will have to change the direction of Labor against Brexit by the end of the year".

He said that Labor's policy on a second referendum and Brexit have "gone a long way" in recent months.

On BBC News, the campaigner of the referendum said: "Our campaign is to change the Labor policy so that a popular vote takes place.

"They've had the six tests for the year, I do not see how the government will be able to meet Lab's six tests, so eventually Labor will have to change its position.

"We believe this should be a People & # 39; s Vote because of the impact of a no-deal on employee protection, the economy and environmental protection.

"The most important tests say that every contract would have exactly the same benefits that we have now, and I do not see how a no-deal or government deal scenario would help."

At the weekend, the People & # 39; s Vote commissioned polling stations, suggesting that voters targeted by Labor were more inclined to support a referendum – and to stay in the EU – than the electorate as a whole.