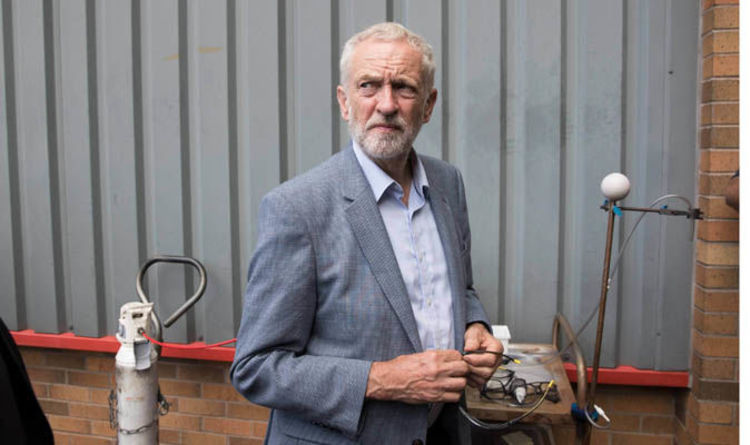 The leader began yesterday with a series of visits to major target sites north of the border when he was cheated by accusations of anti-Semitism.

Mr. Corbyn condemned former Scottish MP Jim Sheridan who was suspended because he claimed that "the Jewish community" worked with "Blairite plotters" to undermine leadership.

When he spoke to the bus company in Falkirk, Mr Corbyn insisted that Labor should take action against anyone who behaves in an anti-Semitic way.

But the experienced left wing was also confronted with new research into his dealings with the Palestinian terror group Hamas.

The ex-MP fire brigade lost its seat in 2015 and is now a council member of Renfrewshire.

Mr Corbyn said: "It is completely wrong what he said.

"He has withdrawn it later, he is suspended from membership, there will be an independent investigation – independent of me – so I can not comment further.

"We do not tolerate anti-Semitism in any form, in our party or anywhere else in our society."

Mr Corbyn is under growing pressure to adopt the internationally recognized definition of anti-Semitism as set out by the International Holocaust Remembrance Alliance.

He also received criticism from a 2014 visit to the Palestinian martyrs' cemetery in Tunisia.

Yesterday he said he could not remember that he had eaten Hamas chef Khaled Mashal in Gaza in 2010, despite reports that he had told such a meeting in a column for the Morning Star newspaper.

He said, "A takeaway, I do not remember takeaway.

"I have met many people from many aspects of the Palestinian cause as a way to establish dialogue, as a way to bring about peace."

Mr. Carlaw said, "It is not a plot, instead, the incredible lack of leadership of Mr. Corbyn in this matter, despite the clear anti-Semitism within the ranks of Labor, is called."

Labor gained six seats north of the border during the general election last year, after shrinking in 2015 to only one Scottish MP.

Mr. Corbyn is expected to claim today that a new poll is due to the way the Tories deal with Brexit.

Mr. Corbyn will say: "We are within reach of a Labor government that works for the many, not for the few, do not be mistaken, we are ready to fight and win the next general election."

He adds: "It will be Scottish voters who kick the Tories out of Downing Street when the time comes – and the UK will benefit from a Labor government that ends austerity and invests in our people and public services."