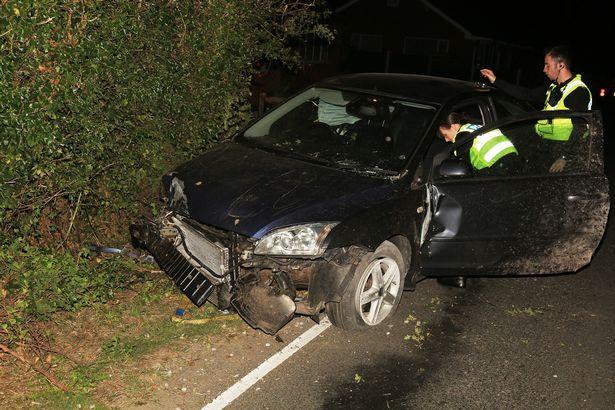 A DAD left his injured son in a devastated Ford Focus after being hit by a garden wall and landed on his side.

After the crash around 9pm on Saturday evening in the village of Airmyn, in East Riding of Yorkshire, the driver fled the scene and left his injured child in the damaged vehicle.

The police were called at 8.41 am to the wreck in the village, near Goole, where they found the child alone. No details about the age of the boy have been given.

A spokesperson for Humberside Police said: "The vehicle left the road and hit a parked car on a disk and ended up on its side. [in Airmyn] before the police arrived.

"Patrols carried out a space for him. The passenger was treated at the scene of ambulance by telling agents that his father, who was under the influence, left him wounded there."

Three hours after the crash, the troops said that a saloon car was out of the Ford Focus & # 39; uncertain position & # 39; in someone's front garden.

The driver seemed on his way to the A614 when he crashed, tore off his front bumper and caused great damage to the front of the car.

One witness said: "A black Ford Focus lost control and collapsed through a garden wall before eventually ending up in a huge hedge.

"Police and ambulance teams came in. When I got there, the police had just pulled the car out of the hedge and drove on the road.

"The car also took a pine tree from the front yard, which had jammed in the hedge and had been pulled out of the car by the roots."

IT IS IT AGAIN

HAVE YOU SEEN HER?

Black box & # 39; recorders that can be mounted on thousands of cars to reduce the deaths

It is not known whether the police picked up the driver after he ran away. Sun Online contacted Humberside Police for a response.

Photos made on the spot show the destruction left by the car.

Garden ornaments were destroyed while rubble and car particles were scattered across the floor.