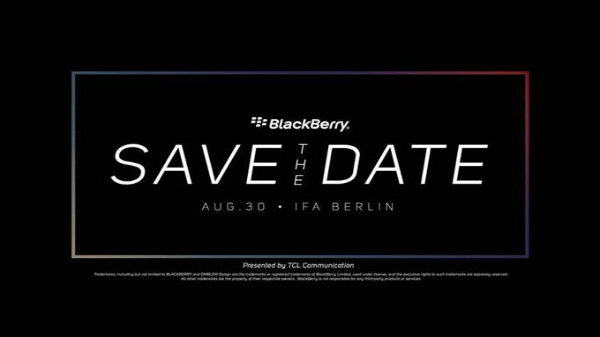 We are only a few days ahead of the IFA 2018 trade fair in Berlin. Now that we are approaching the technical expo, there is concrete evidence regarding the launch date of the next BlackBerry smartphone. A new teaser that surfaced online suggests that the upcoming BlackBerry KEY2 LE will be unveiled during the IFA 2018 expo, which is all about to start a few more days.

The video teaser has been posted by the official Twitter handle from BlackBerry Mobile. The teaser shows almost the entire back design of the smartphone, except for the camera. Although the teaser does not shed light on the camera that will use this smartphone, the previous reports have been tipped by the presence of a 13 MP camera on the back and a 5MP selfie camera.

TCL has already sent media invitations for an event that takes place on August 30, and that is only a few days later. During the event there are speculations that the next BlackBerry smartphone could be revealed.

Like the previously launched device, the BlackBerry KEY2 LE is also expected to show off a physical QWERTY keyboard. And the space bar of the keyboard is expected to double as the fingerprint sensor. It is assumed that the smartphone shows off a 4.5-inch display with an almost FHD resolution of 1620 x 1080 pixels. The smaller screen size and resolution are logical because there is a keyboard on the device.

Under the bonnet, the smartphone probably uses an octa-core Snapdragon processor that is clocked at 1.8 GHz. This processor is expected to be accompanied by 4 GB RAM and 32 GB / 64 GB storage space. At the back, the BlackBerry smartphone is likely to include a dual camera setup with 13 MP and 5 MP sensors. The selfie camera is also said to be a 5MP module. The whole package is expected to be supported by a 3000mAh battery.

Since the smartphone does not bundle impressive specifications like the flagship models of the current generation, we can expect to be reasonably priced without being too expensive. Let's wait for an official confirmation to learn more about the BlackBerry KEY2 LE.

You are already registered