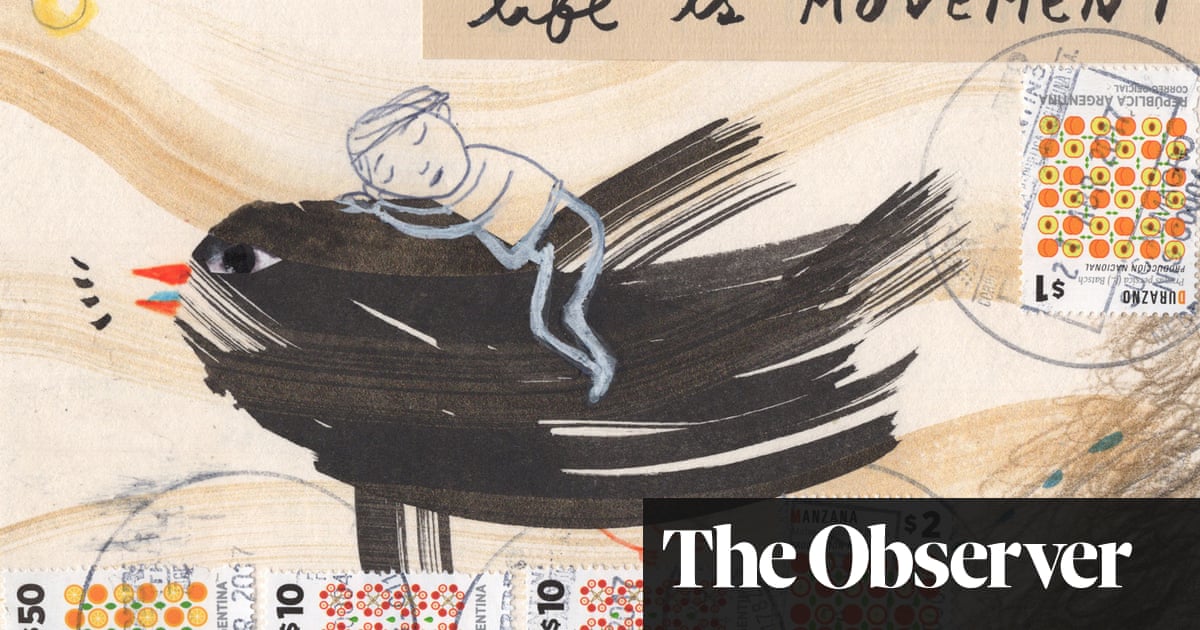 IIt was Piet Grobler and Tobias Hickey, founders of the International Center for the Picture Book in Society of the University of Worcester, who first came up with the idea: they invited illustrators via social media and word of mouth to bird note, as a metaphor for human migration, with an attached message. It may be what the illustrators liked: a poem, a quote, a personal greeting and a stamp from their country. The result was overwhelming and moving: 300 postcards flew in and were exhibited at the Bratislava Biennale (and later in South Africa and Nami Island in South Korea). Postcards were hung on vertical threads, the organizers' intention to "copy the precarious nature of the flight". If you touched a card, the others would turn and move, the whole structure would vibrate – a silent communication network.

This captivating show is inspired by what it is like to flee on a wing and a prayer. And now there is a beautiful book in postcard format, Migrations: Open Hearts, Open Borders (published by Otter-Barry Books), including a selection of 50 of these images and other more recently received illustrations. Publisher Janetta Otter-Barry says that making the selection was difficult, but the result is vividly diverse with big names (Petr Horáček, Nicola Davies, Jon Klassen) among many unknowns. As a publisher of children's books (she was once director of Frances Lincoln), she sees it as essential & # 39; to have hope & # 39 ;. It is the defining quality of migrations.

Mohammad Barrangi was born in Rasht, northern Iran, and now lives in the United Kingdom. As a refugee, he contributes an illustration that is just as complicated as any Persian rug. He invents a "legendary" bird that will safely transport people to the countries of their dreams. I admired his work and only afterwards learned that he has a disability in his left hand and makes his prints partly by using his leg, his illustration itself is a triumph over the circumstance.

Norwegian illustrator Stian Hole plants roses and rainbows in his bird's flight path and accompanies his illustration with a beautiful poem by Olav Hauge, translated by Robert Bly, who sees flight as an opportunity: "It is that dream that we carry with us / that something great will happen, / that it must happen, / that time will open, / that doors will open … "Japanese illustrator Kana Okita keeps his work strikingly minimalist with sparse white lines against a blue sky and a single word : "Hope!"

The hearts of illustrators may beat as one, but each bird's eye view is pleasantly different. Otter-Barry was particularly surprised to receive Jackie Morris' contribution, because her beautiful beak falcons, with their hooded eyes against a golden background, were cut in half. The accompanying poem, an enchanting acrostic by Robert Macfarlane, was therefore cut in the middle. "You had to put it together to read it," says Otter-Barry. But they soon realized that they could use the divided map as bracts and now she rejoices in what she supposes Morris meant: "It was daring. She wanted to show separation, displacement. & # 39;

Shaun Tan, the Australian illustrator, asks in his introduction: "Can small gestures – a photo, a friendly message – make a difference?" He believes they can "by creating, looking, asking questions, confronting despair, we invest back in an economy that is much bigger than any stock market, much more noble than any political system. .. "Not that Tan & # 39; s exuberant idealism makes him blind to the challenges that migrants face:" Like the Nordic tern, heading for a new nest about 20,000 km away, flying through darkness with only the thinnest magnetic songs for bearings, the migrant goes to the unknown, which contains both promises and fears. "

It is Otter-Barry's intention to spread the book as widely as possible in libraries, schools and, where possible, refugee camps. She mentions a library of Ibby (the International Board on Books for Young People) on the Italian island of Lampedusa, used by local and migrant children, and also workshops with the book by the illustrator Jane Ray, who works with refugees in Islington, North London . Royalties go to Amnesty and Ibby. It is impossible not to wish this book to fly, especially in the hands of migrants due to its powerful and uplifting lack of sentimentality. Sometimes it is the simplest ideas that move us the most.

The Irish illustrator PJ Lynch draws a bird over dark rocks and an uncertain sea. It is a beautiful but also a literal image. The uncomplicated greeting goes straight to the heart: "Wishing that anyone who crosses a vast and furious ocean with hope for a better future will be welcomed by a generous heart. Safe journey."