The unique Batmobile is sold for 750 thousand dollars 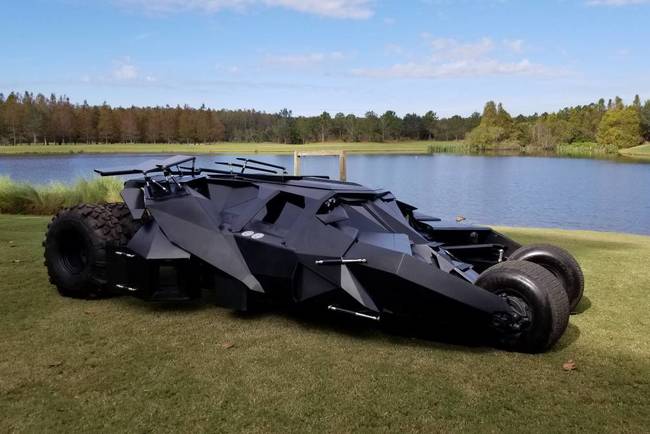 The machine is equipped with a 5.7-liter V8 and automatic transmission

On the site Craigslist there was an announcement about the sale of a single replica of the "Batmobile", the design of which uses carbon fiber. The machine is equipped with a 5.7-liter atmospheric V8 engine, automatic gearbox, hydraulic brake system and rear shock absorbers for more comfort while driving. The price is 750 thousand dollars.

The heart of the Batmobile Tumbler is a steel frame with a Chevrolet rear axle on which 44-inch wheels are mounted. The body panels are made of high-quality steel and aviation composite. The interior of the "Batmobile" and the rear wing are made entirely of carbon fiber.

The equipment Tumbler contains a multimedia system with Bluetooth support, eight navigation lights and projectors with the Batman logo, as well as eight cameras that broadcast the image on four screens. In addition, the machine is equipped with reinforced steering and racing seats, the housing of the replica is covered with a special polymer compound to protect against chips and scratches.

Remember that the drivers in Kiev on one of the streets saw the tow truck, which carried a very unusual sports car. For example The car is a copy of the "Batmobile" – The car on which the hero of the comic strip rides, Batman's superhero.

We wrote that too the makers of the Ukrainian supercar Himera-Q, which became famous throughout the country last year, restored the legendary Batmobile from the movie "Batman" in 1989. The car already has potential buyers, ready to give him a lot of money.

back in the days the American changed the Toyota Camry into a ghostly batmobile with machine guns. The Toyota sedan gained a huge wing and a kind of rocket accelerator. In addition, models of machine guns have been mounted on the roof and on the sides.

You are now viewing the news "Carbone Batmobile is sold for 750 thousand dollars." Other Autonews look in the block "Latest news"