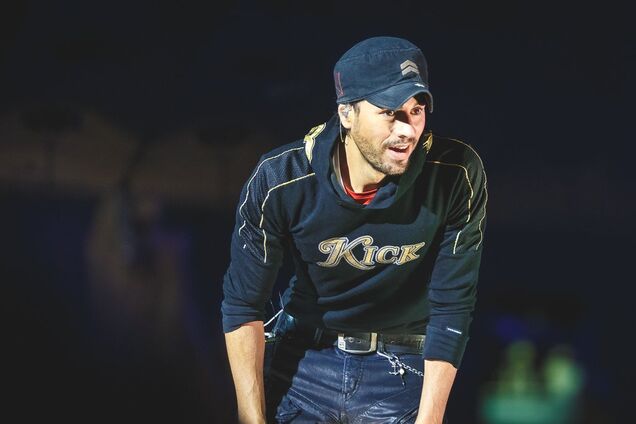 The last day of September was marked by a concert by the star of Latin American pop music Enrique Iglesias, who was waiting for the NSC Olimpiyskiy. His appearance on stage was characterized not only by a number of records, but also by a dream that came true for millions of fans.

The organizers of the performance of the artist in Kiev, which took place on September 30, calculated the number of spectators in the stadium. It turned out that about 100 thousand spectators came to listen to the live performance of the Enrique head hits. This is not only a new account of the Ukrainian phase, but also the most convincing results of the concert activity of Iglesias Jr. during the current world tour.

Remember that the tour Enrique Iglesias Live started in March 2018 and has already collected thousands of spectators in Europe, Asia, North and South America. Before the concert in the Ukrainian capital one of the best figures was shown by the show of the artist in Tel Aviv, who collected just over 41 thousand fans of the singer.

It is reported that Kiev with its 100 thousandth "Olympic" breaks the Israeli record.

People simply paralyzed the movement in the central part of Kiev, because they found this visit to Iglesias special.

Just as the presenters Masha and Frank, who worked on the stage during the meeting of spectators, discovered, many guests from the capital attended the stadium. Fans of the singer came from the Dnieper, Odessa, Kharkov, Lviv and other cities. Also in the fanzone were people from abroad.

Enrique Iglesias himself came on stage exactly as the organizers had promised: before the concert the NSC Olimpiyskiy portal published the rules of conduct in the stadium, indicating that the artist starts performing at 9 pm. By the way, in the same rules, the lists of items that were forbidden for pronons were made public at the NSC.

All the people who could not get to know them or carry large bags could use the ATB storage camera at the entrance. This is not the only detail that allowed thousands of fans of the singer to thank the commercial network for their attention.

In general, the Ukrainians were grateful to the company, which was able to bring a show of this level to our country and make its visit accessible to thousands of compatriots.

They wrote about their impressions in social networks.

Do not be so afraid of my damn bula, sure I did not care for iglesia. Tse right yak here in umovnij 2007 the turn. At the dances, a yoga discipleski who dances, started to lose their minds. Similarly, "Push" was put on Novy Rik. At the moment I am not crazy about Enrique, yak in rock, 10, ale zvіsno yakіs tracks know, more than that, навать пісні Хуліо Іглесіаса в мен є 😎. In short, there are two cruises and tsikavy for me concert. I thought I thought the guy was cold and a bulo duzhe would be hot. Well I # s ATB dnyuhu, dyakuyu for privozС- MС-nusi: (!) VС-sututnС-st mС-nС-malnogo obshuku on vhodС-, chaotic nakleyuvannya strС-shok, Bagato inadequacy of i vgashenih people. Plus: Enrìke😎❤✋ #enriqueiglesias # or Russians # atb25 # ns

As reported by OBOZREVATEL, on September 30, the streets flooded at the NSC Olimpiyskiy, where the concert was to be held, the crowd of fans of the artist, and the sports complex had a huge traffic jam

Remember that the last time that Iglesias spoke in the Sportpaleis in Kiev in support of his album Insomniac in November 2007.