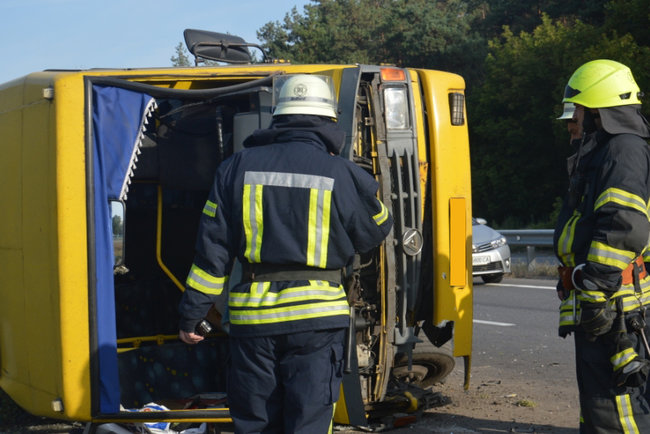 There is a child among the victims

The number of injured as a result of a bumper bus and truck in the Dnipropetrovsk region has increased to 16 people. This was reported by the press service of the emergency service of Ukraine.

"The driver of the MAN truck did not have control and collided with the Etalon shuttle bus, which moved along the Dnieper-Zarya route, – Rescuers told.

Of the 16 wounded there is one child. He was hospitalized at the regional children's clinic. Two other victims were sent to the 16th city hospital in the Dnieper, and 13 people were admitted to the 6th city hospital.

Moreover, the rescuers of the emergency service of the state have removed the concrete pillars that fell as a result of the traffic accident on the road. Police officers carry out investigative actions to determine the circumstances of an accident.

Let's remember, Today, on August 20 at 7:10 on the M-31 Dnipro-Tsarichanka-Kobelyaki-Reshetilovka highway, a minibus and a truck collided in the village of Obukhovka. Reported earlier 13 injured in the accident.

Recall, in the past, 2017, the year, Ukrainian law enforcement officers registered 114 thousand cases of driving in a drunken state. In total for a year almost six thousand traffic accidents occurred by drunken drivers. They have killed 115 people.

Moreover, the most common cause of an accident is speeding.

You are currently viewing "Collision of a waggon and a minibus in the Dnepropetrovsk region: the number of victims has increased." Other Dnipro news can be found in the "Latest news"