Honorary consulate of Ukraine was opened in Croatia 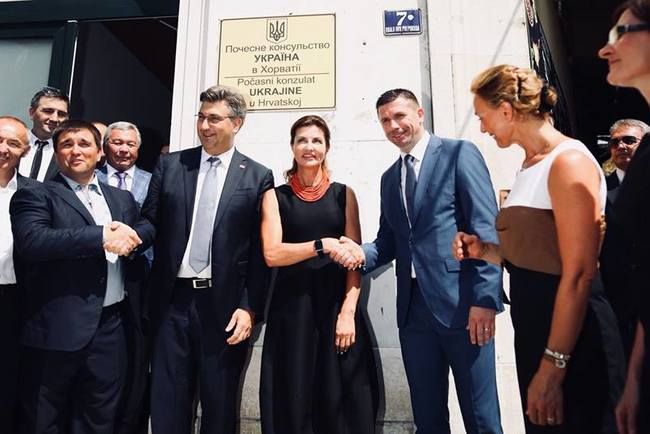 At the opening of the office of the consulate took part the wife of the President of Ukraine Marina Poroshenko, the Minister of Foreign Affairs of Ukraine Pavel Klimkin, the Prime Minister of Croatia Andrei Plenkovic

In Croatia the Honorary Consulate of Ukraine was opened in Split with the cooperation of senior officials of the Croatian government. This was reported on Facebook by the honorary consul, the chairman of the football club "Arsenal" (Kiev) Ivica Piric.

"Today the opening of the Honorary Consulate of Ukraine in Croatia!" – remarked Pirich.

He said that the opening of the consulate's office was attended by the wife of Ukrainian President Marina Poroshenko, the Foreign Minister of Ukraine Pavel Klimkin, the Croatian Prime Minister Andrei Plenkovic.

"Many of my friends visited the opening and of course my family was present, thank you all for your support, I have waited two years this day, a great day for Ukraine and Croatia!" – Pirich wrote.

Let's remember, in Lviv one of the consulates forbade him to come in shorts.

We wrote that too the Consulate General of Belarus in Odessa will be closed.

You are now viewing the news "An honorable consulate of Ukraine opened in Croatia: a photo". Other news from politics can be found in the block "Latest news"