Militants in Donbas fired on residential areas with mortars 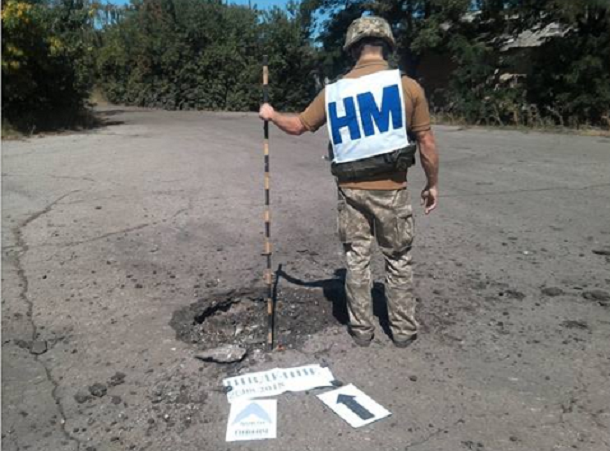 The Ukrainian side of the Joint Center for Control and Coordination again registered a violation of the Minsk agreements and the cease-fire by the Russian occupying forces, which fired from 120 mm mortar grenades on the residential sector of the settlement of the South Bakhmut district in the Donetsk region.

"On 25 August 2018, Russian terrorist forces from a shell of 120 mm mortar shot the residential sector of the village of South Bakhmut in the Donetsk region", – the report says.

The report of the bombing was received at 10 am on 26 August 2018. At the scene of the accident, a funnel was exploded by representatives of the SSCC of an explosion of 120 mm mines on the asphalt road of Ostrovsky Street, one façade of the house of culture was damaged by a fragment of the mine.

Victims among civilians are not registered. Ammunition, which did not explode, was not found. The fire was carried out in the direction of Gorlovka-Yuzhnoe.

The message also highlighted the fact that the distance from the place where the mine reached the nearest positions of the Ukrainian armed forces was about one kilometer.

"straight ahead shows on the deliberate the peeling militants the rest population ", – the report says. 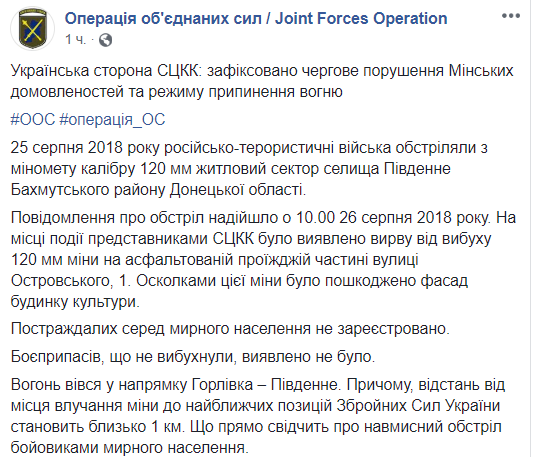 Think that The situation in the Donbass continues to deteriorate – the enemy attacked the position of the Ukrainian army 33 times, but the response fire from the APU caused damage to militants, said the headquarters of the United Forces Operation.

It is worth noting that on 25 August the enemy also used seven weapons that were forbidden by the Minsk agreements, but the Ukrainian army follows the situation at the front. Thus, the Russian invaders fired fire from mortars of 120 and 82 mm caliber, weapons of infantry fighting vehicles, grenade launchers, heavy machine guns and small weapons.

As reported, August 24, militants beat artillery on the Ukrainian army. The invaders in the Donbas have used armaments that are forbidden by the Minsk – Kurpnokalibernye mortars and artillery agreements. A total of 39 bombardments were carried out.

In addition militants bombed Vrubovka village in Donbass. The enemy used large-scale artillery and seven 152-mm grenades hit the residential sector. The army published photographs of the consequences of the enemy's artillery for civilians.

You are now viewing the news. "On the Donbas militants shot the residential sector of the South with mortars – SCPCC." In other news from Donbass look in the block "Latest news"