The situation in the Donbass: a sharp deterioration under Svetlodarsk, the APU has losses 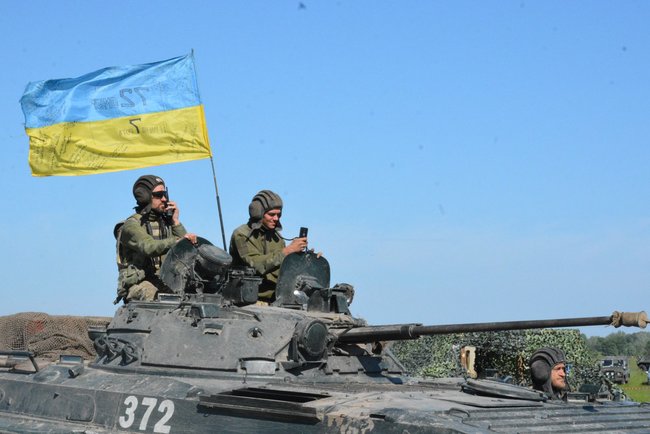 In the last day, September 18, the situation in the Donbas remained under the control of the united forces. 25 times the Russian occupier opened fire on the positions of our troops. Twice – with the use of weapons forbidden by Minsk.

This is the headquarters of the operation of the United forces on its Facebook page.

The Russian occupation forces shot the positions of the united forces in the areas of the settlements of Stanitsa Luganskaya, the Crimea and Novotoshkovskoye (in the direction of Lugansk), the Lugansk (Svetlodarskaya arch), the Yuzhnoye (near Gorlovka), Sands (near Donetsk), Novotroitskoye (near Volonovokha), Staragnatovka, Pavlopol, Gnutovo, Vodyanoye, Lebedinsky and Shirokino (in the direction of Mariupol).

The positions of the united forces in the vicinity of the Luganskoye settlement were subjected to powerful shelling of mortars of the 120th and 82nd caliber. Also, according to the positions of the Crimean defenders, the invaders opened fire twice from the BMP-1 armament.

During the fighting, two members of the United Armed Forces were killed, one was slightly injured.

According to the intelligence service, three invaders were destroyed during the day, five injured. 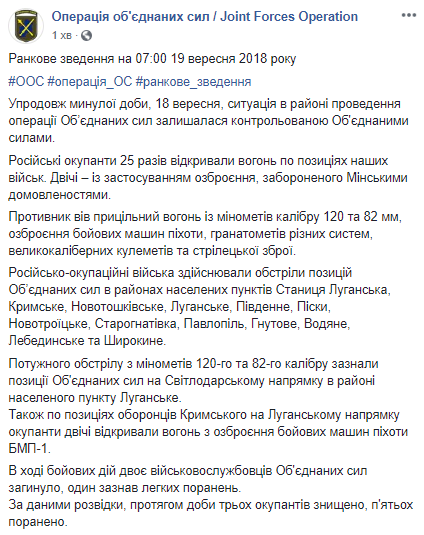 Since the beginning of the day, the enemy of grenade launchers, heavy machine guns and small arms fired three positions from the united forces in Troitsky on Lugansk, Berezovoy – in Donetsk and near Lebedinsky in the direction of Mariupol. There is no loss between our defenders.

Recall, a day earlier, on 17 September, The APU was taught by militants in the Donbas: the enemy reduced the number of blows by one and a half times (21), an archer was destroyed and another – injured.

16 September militants in the Donbas to 30 increased the number of layoffs and members lost – Three invaders were destroyed and three were injured. Especially & # 39; is called & # 39; was near Donetsk and Mariupol.