The situation in the Donbass – APU destroyed three militants 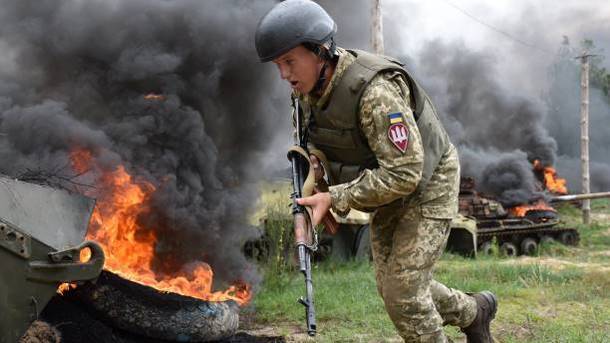 At the front the situation remains tense, the enemy is constantly attacking

The enemy continues to violate the armistice and has opened fire on the positions of the Ukrainian army in the Donbass 23 times, including the use of prohibited weapons, according to the headquarters of the United Forces Operation.

On 20 August, the enemy fired mainly from grenade launchers, heavy machine guns and small weapons, and in separate directions from mortars of 82 mm caliber. Enemy attacks were carried out on the defenders of Crimea, Svetlodarsk, Popasnaya, Maryinka, Gnutovo, Pavlopol, Lebedinsky, Vodyan, Shirokino. At Lebedinsky the enemy used mortars of 82 mm. The invaders also fired shells of 120 mm mortar at the edge of the Novoluganskoye settlement.

As a result of the fighting two soldiers of the APU were wounded, and the militants lost more – three intruders were killed and two injured.

During the current day, Russian occupying troops of armored vehicles and large-scale machine guns fired at the positions of Ukrainian defenders in the vicinity of Lebedinsky and Vodyanoye settlements. 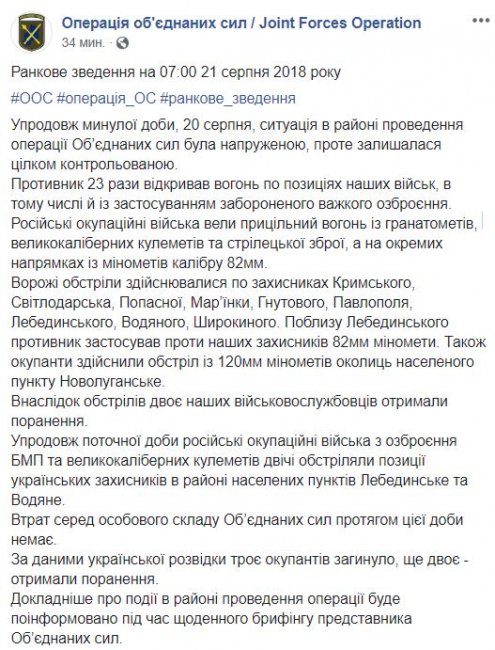 As mentioned, however, on 19 August the enemy opened fire on the positions of our troops 20 times The APU trained militants well and forced to halve the number of shelling. The enemy also used BMP.

As coordinator of the "Information Resistance" group, People & # 39; s Deputy Dmitry Tymchuk, APU in Donbass took control of a new settlement. According to him, as a result of a carefully planned operation, the settlement of Shuma under the control of Ukraine.

You are currently viewing the news "The APU has caused militants damage to the Donbas: the EOS reported a situation on the front line." In other news from Donbass look in the block "Latest news"