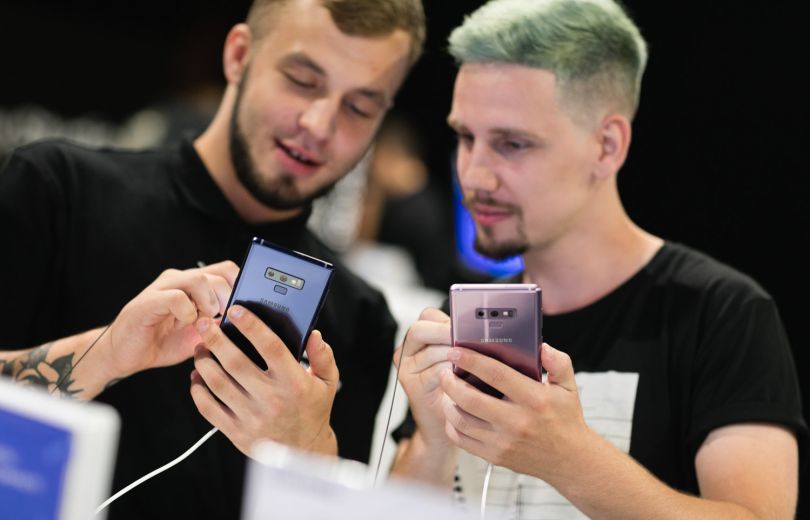 The improved smartphone became a continuation of the legendary line, which has completely changed the idea of ​​mobile devices in recent years. The model combines a durable battery, dual memory capacity compared to its predecessor, a powerful and fast processor and an advanced S Pen pen with Bluetooth Low Energy support for remote management. Thanks to this expansion Galaxy Note9 expands the possibilities of smartphones and makes it possible to achieve more – both at work and in other life spheres. Leading presentations were the well-known showman Anatoly Anatolych and the product marketing manager for Samsung Electronics Ukraine Evgeny Kim. 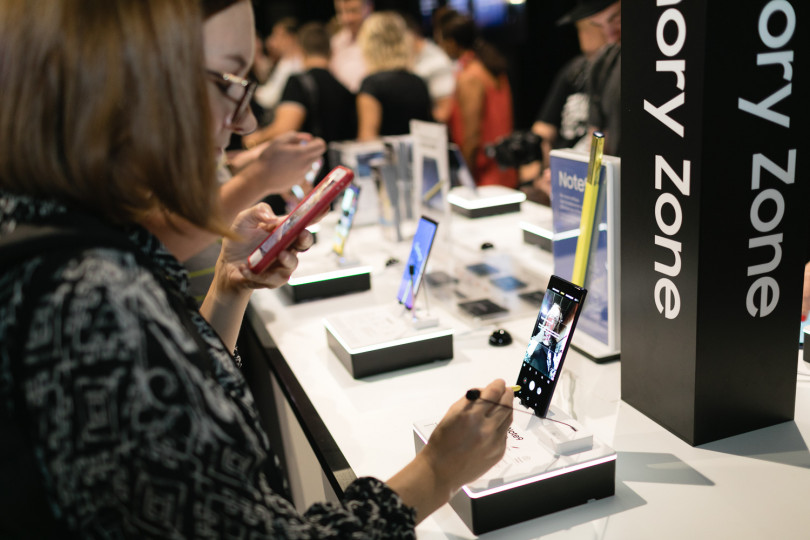 "The history of the Galaxy Note began in 2011 – even then the distinctive features of the line performance, a large screen and S Pen, and although there have been many changes since then, Galaxy Note9 continues to be the most prolific mobile device in the world, – Sergey Livinsky, Head of Mobile Devices at Samsung Electronics Ukraine, said during the presentation – The novelty again raises the bar for mobile devices and brings the industry ahead The key to success is the development of Galaxy Note9 in accordance with the requirements of users who strive to achieve more. " 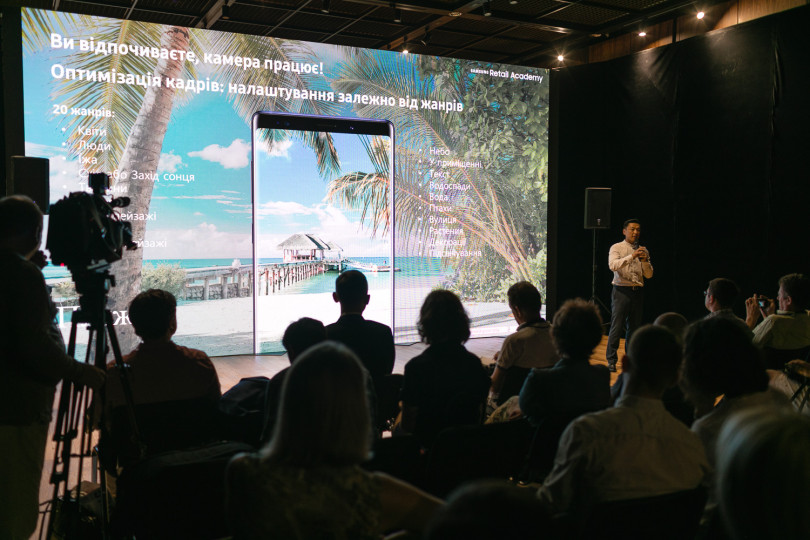 During the presentation, Eugene Kim spoke about the most important features of the novelty about the example of real life situations and demonstrated some in practice. 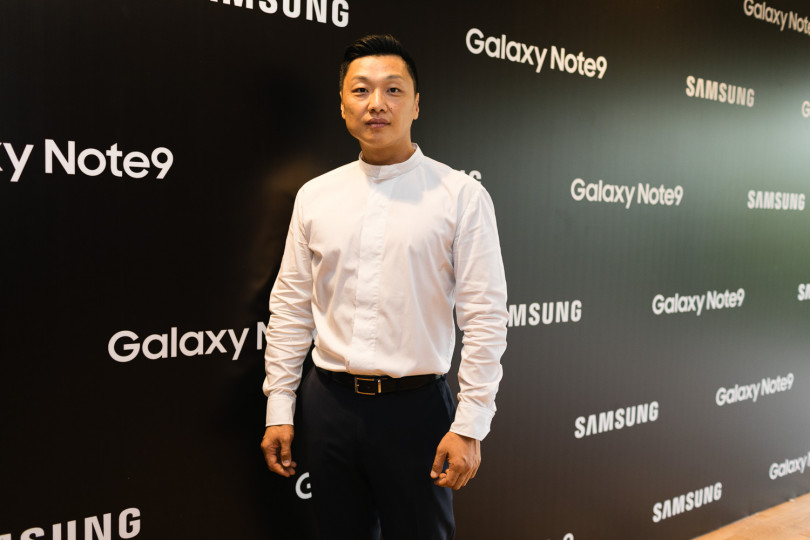 Productive work during the day

A suitable battery is required for a smartphone for active users. That's why Galaxy Note 9 received a battery with a record for both Galaxy flagship capacity of 4000 mAh.

The battery with support for fast and wireless charging technologies is not only the most powerful in the Galaxy series, but also the most reliable. This guarantees a strict 8-level battery safety test from Samsung. In addition, the battery is approved by experts from Underwriters Laboratories and Exponent.

Galaxy Note9 helps you fulfill all tasks, can withstand all scheduled meetings and achieves maximum performance throughout the day. It allows you to spend more time on important tasks and not think about the presence of outlets or external batteries in the neighborhood. 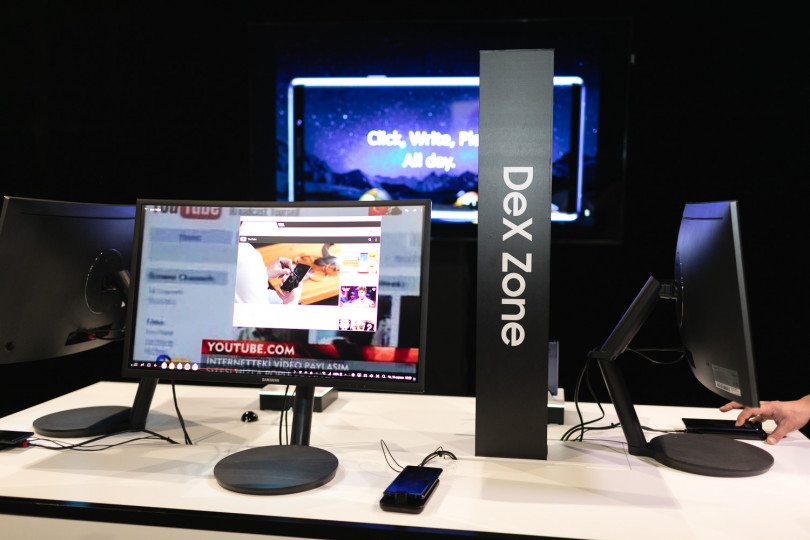 More memory for your files

When making Galaxy Note9, the company created a large amount of memory. The combination of impressive internal space and support for microSD memory cards will in most cases eliminate the need to remove old content for uploading new photos, videos, applications and files.

For this Galaxy Note9 received 128 GB of internal memory and 6 GB of RAM in the basic version. The 512 GB version and 8 GB in combination with microSD memory card support provide access to 1 TB storage space. The availability of this version in Ukraine will be reported later. 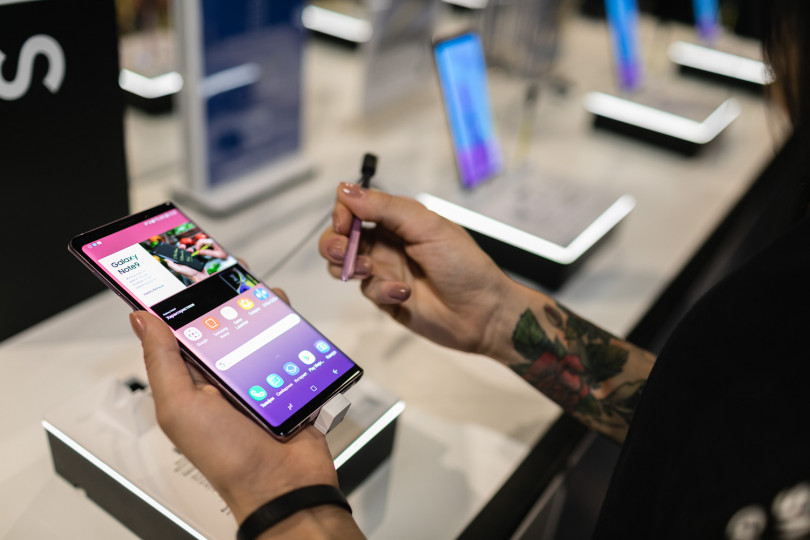 To maximize the use of time, not only memory is required, but also a high speed of data and network loading.

Achieve incredible results Galaxy Note9 enables a 10-nanometer processor that shows the increase in CPU and GPU performance by 33% and 23%, respectively. It also shows breakthrough performance on the network – the download speed is 1.2 Gb / s. 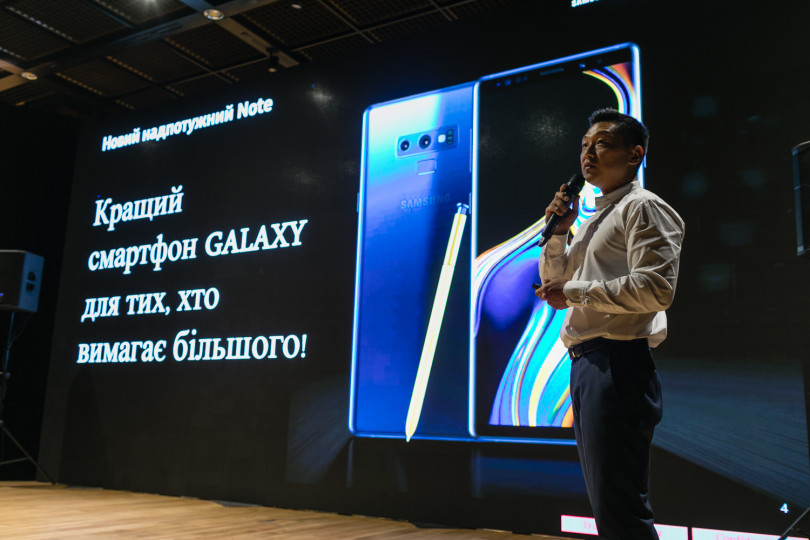 Combine the incredible performance and power in Galaxy Note9 including the carbon water cooling system. With this the smartphone can work without delay even under heavy loads.

The Samsung cooling system counteracts the heating by means of heat pipes – temperature distributors – three times the thickness of a comparable solution in Galaxy Note8. In addition, the company increased the internal water consumption in the system to more efficiently absorb heat and applied the advanced material of the carbon fiber TIM. It is 3.5 times more efficient to transfer the heat from the processor to the temperature distributors. This increases the thermal conductivity and prevents the housing from overheating. 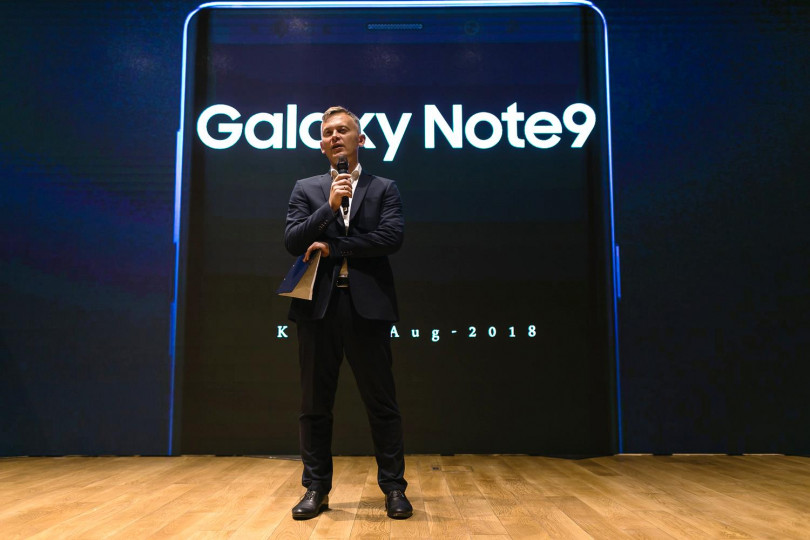 Galaxy Note9 has a built-in algorithm for controlling performance based on artificial intelligence. It offers up to 40% increase in FPS stability (frames per second) during games. The result is that the graphic display on the screen looks smoother, even in advanced games such as Fortnite & # 39 ;. 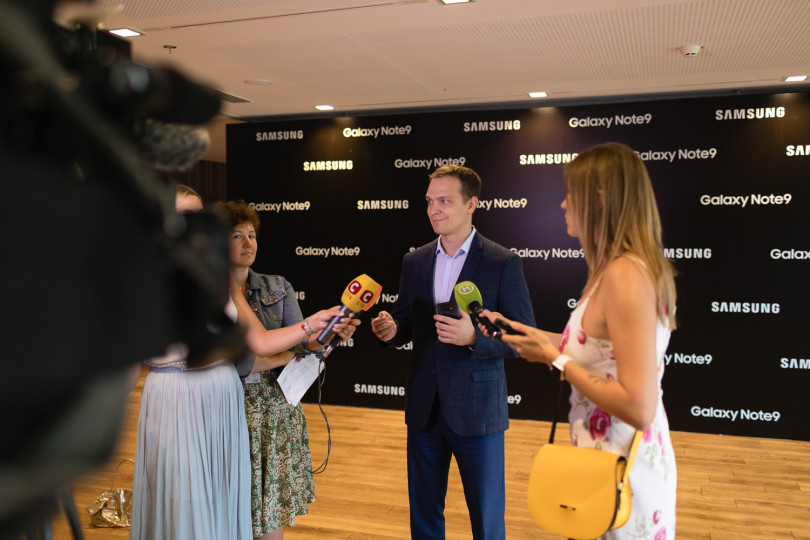 Reduction in the number of frames per second in action games such as "Fortnite" guarantees almost a loss. Timing and accuracy of actions play an important role and it is unlikely that the sinking of an FPS will repel an attack. Most likely it will end with an accurate shot from the opponent and the defeat in the fight. A smooth and stable gameplay on Galaxy Note 9 does not allow this to happen and helps to become a winner. 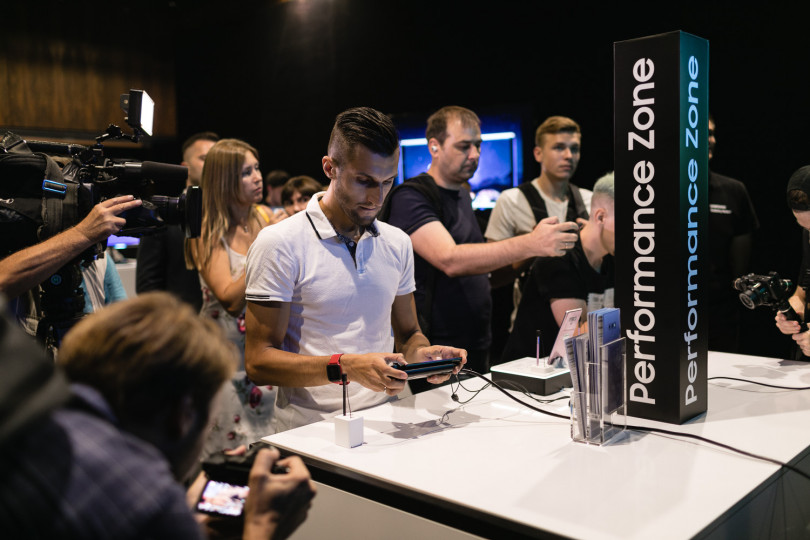 The electronic pen of the S Pen has changed the way people think about the interaction with smartphones. This important feature of the Samsung Galaxy Note line has evolved considerably in style, design and features.

S Pen in Galaxy Note9 with support for remote control using BLE connection increases the previously set bar to a new level. The electronic pen changes simple clicks into useful actions and acts as a remote control at distances up to 10 meters. 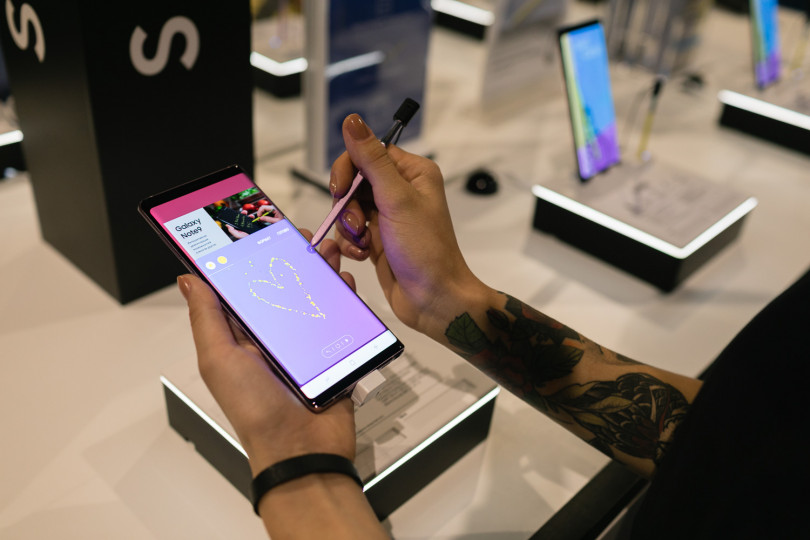 So when the next selfi is made with friends, the owner of the smartphone no longer has to drag his finger to the screen and spoil the frame. Instead, simply press the button on the S Pen and you will get a beautiful picture. A double click switches the main camera to the front camera and vice versa.

The new functionality of S Pen is also supported by other applications: gallery, program & # 39; s for working with media, and so on. One click or double click stops the song, plays the next video or track, and shows the next or previous images in the album. With S Pen you can also switch presentation slides while working with Galaxy Note9 and Samsung DeX. Change the assignment of pressures in the S Pen itself will be in the settings. 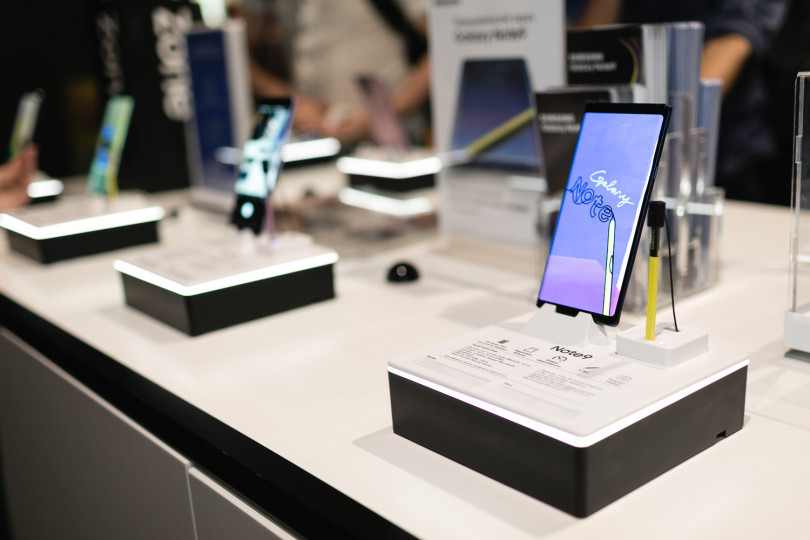 S Pen starts immediately when it is removed from the smartphone and performs functions even when Bluetooth is turned off in Galaxy Note9. For a full charge, S Pen is only 40 seconds. This is enough for 30 minutes of work or up to 200 clicks.

S Pen also supports the functions of Photo Drawing and Line Drawing from PENUP. The first allows the user to convert photo's of the gallery into artworks, while the second offers video tutorials to improve the skills of the artist. 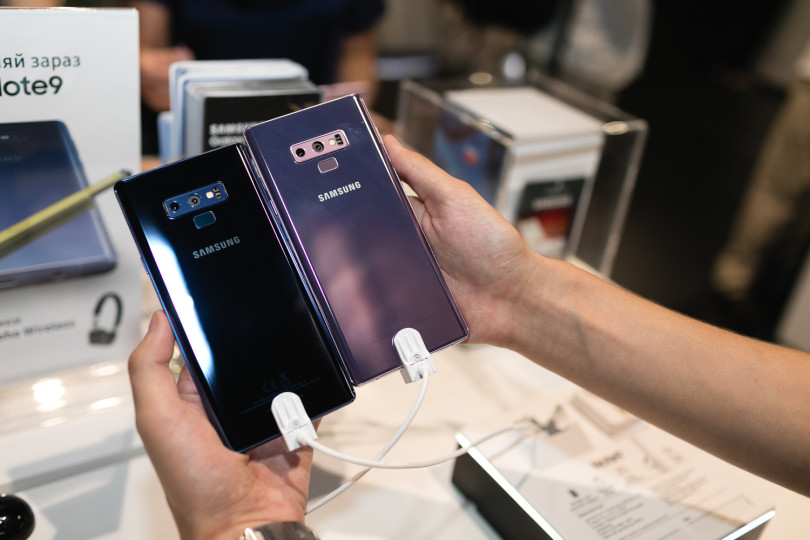 The solution for improving the performance of Samsung DeX in combination with Galaxy Note9 has become even more versatile. The new compact HDMI adapter makes the use of Samsung DeX much more convenient. Because the need for an additional device is no longer available, users can enjoy the interface of a PC at the office, at home or while traveling. Support for two screens allows you to work simultaneously on Galaxy Note9 and the connected screen. In addition, the smartphone can be used as a keyboard, touch pad or surface to create drawings with S Pen.

Camera Galaxy Note9 received the best in the Samsung technology industry, which complemented the possibilities of a thorough training for creating ideal images.

New functions for detecting defects and optimizing scenes use artificial intelligence. The first function alerts the user to the presence of shortcomings in the photo: closed eyes, excessive lighting in the image or spots on the lens. The second automatically analyzes the objects in the photo, the composition and the timing of the snapshot to determine the type of photo and the selection of the optimal shooting conditions.

Usually users take pictures of the sunset and ensure that the smartphone does not display all the grandeur of the moment. The Scene Optimizer function in Galaxy Note 9 automatically changes the brightness, white balance, saturation and contrast of the frame to take the best picture. Because no internet connection is required, the smartphone makes photo masterpieces under all circumstances. 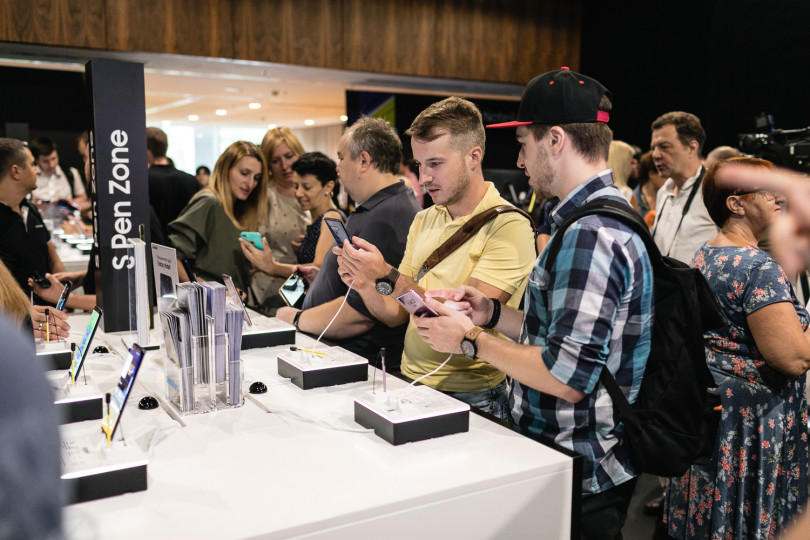 Galaxy Note9 has received the traditional Note Line design that the users know and love. He received additional improvements for more comfort and ease of use.

6.4-inch Super AMOLED Galaxy Note9 screen – the largest in the range of devices. It offers the necessary space for games, films, images or drawings with S Pen. According to DisplayMate's conclusion, Galaxy Note9 "is the most innovative and powerful display throughout the entire time that the laboratory is being tested." The smartphone has set different performance records with a thorough analysis of DisplayMate and received the highest score from A +.

"The level of performance and the possibilities of displays is growing every year, but Galaxy Note9 has been able to raise this bar significantly," – so, concluded DisplayMate Technologies after testing the Samsung Galaxy Note9.

The metal frame of the smartphone looks elegant and elegant and also combines glossy and matte surfaces to guarantee a premium appearance.

Galaxy Note9 is available as pre-order in Ukraine in three colors: black, blue and lavender. Visit https://www.samsung.com/ua/smartphones/galaxy-note9/buy/ for more information about pre-order conditions. 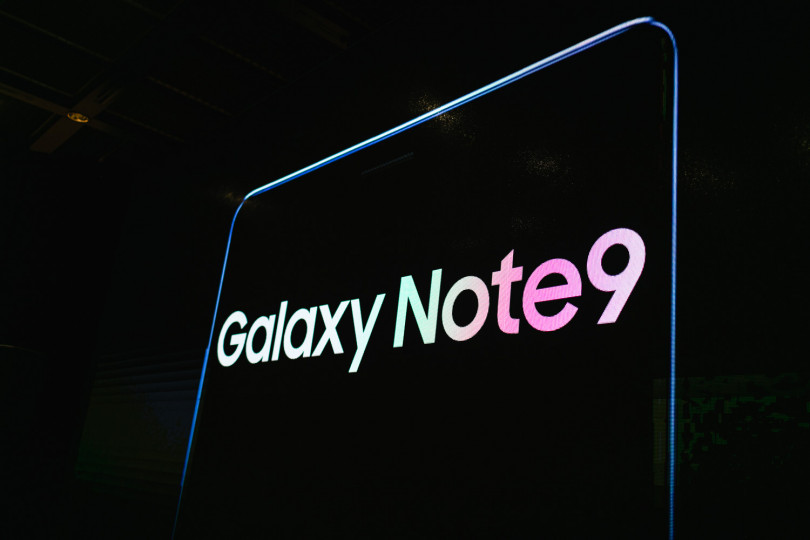