Water ice. What scientists found on the surface of the moon

Astronomers discovered for the first time direct evidence of the presence of a layer of water ice on the earth's satellite.

Scientists have finally proved the presence of water ice on the surface of the moon. For the first time this was not determined indirectly, but by direct observations from the near-lunar orbit.

Ice on the moon was found in circumpolar areas in so-called cold traps – permanently darkened areas around the poles where extremely low temperatures prevail. from Korrespondent.net tells the details.

Water on the moon

Astronomers discovered for the first time direct evidence of the presence of a layer of water ice on the surface in the circumpolar areas of the moon, according to an article published in the journal Proceedings of the National Academy of Sciences.

A small slope of the axis of rotation of the moon, Mercury and Ceres in relation to the plane of the ecliptic has long inspired the idea that in the polar regions of these solar system elements there may be features of the relief that once formed shaded spots in which sunlight never falls.

Bombs have been canceled. Mars until it becomes a new earth

As a result, the temperature at such places must be very low and only be determined by the heat flow from the interior and reflected from adjacent walls by light.

It is assumed that such places, usually craters, serve as traps for volatile substances, and in the first place for water that can accumulate there for a long time.

"Most of the ice is in the shade of the craters at the poles, where the temperature does not rise above -156.5 degrees Celsius." Sunlight never comes into these parts of the surface because of the slight slope of the moon's axis of rotation, "NASA said in a statement.

Previous evidence of the presence of water ice on the moon was found by the Lunar Reconaissance Orbiter probe and the Lunar CRater Observation and Sensing Satelli station. However, they can refer to other compounds, for example to hydroxyl groups.

Liquid water on Mars. How the discovery was made

Direct evidence was obtained using the Moon Mineralogy Mapper tool on board the Indian probe Chandrayaan-1. The researchers analyzed the spectra of the radiation that was reflected from the surface of the moon.

The great advantage of this method is that you can directly measure the vibrations of molecules and distinguish water ice from other comparable compounds or water in a different form (liquid, absorbed by the surface or in the composition of hydrated minerals).

Researchers studied areas between regions that are exposed to direct sunlight and permanently darkened areas. 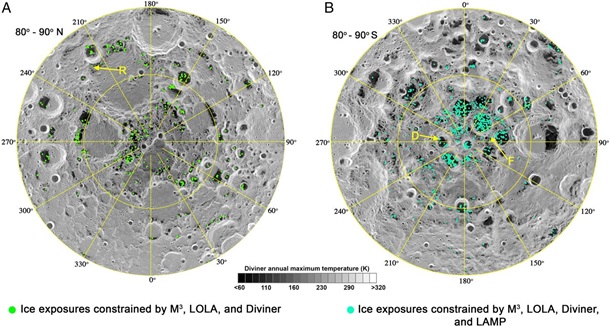 Water ice on the moon

By analyzing this spectrum, astronomers have discovered reliable signs of the presence of water ice directly on the lunar surface – at a depth of less than a few millimeters.

"We found direct and decisive evidence of the presence of naked water ice in the polar regions of the moon.The excess and distribution of ice on the moon is different from the situation on other atmospheric solar system bodies such as Mercury and Ceres, which may be due to the unique formation and evolution of our Moon ", says the study.

The researchers concluded that the ice on the moon is not clean – the mass fraction can be 30% or higher if it is only mixed with regolith (surface layer loose moon round), or about 20% if ice occurs as separate areas in the regolith.

Enceladus. Life is possible in the Saturn satellite

These data indicate that there is not as much ice on the moon as previously thought. In 2009, NASA declared that the presence of water was detected in the lunar surface samples obtained during the Apollo mission in the 1970s. Then scientists calculated that in one ton of the surface of the moon can be up to 946 milliliters of water.

Moreover, the accumulation of regolith in the craters probably takes place quickly enough. It is assumed that the moon has a modern slope of the rotational axis for two to three billion years, so the detected ice can, as astronomers suggest, be very old.

The source can be comets – but simulations show that stocks have dried up after 20 million years. Nevertheless, scientists can not unequivocally tell how the solar wind, galactic cosmic rays and interplanetary medium influence the evacuation of the surface.

Scientists believe that the discovery of deposits of water ice on the moon in the future can help in its development through manned expeditions.

Life on the moon

In an article published on August 1 in Astrobiology, it says that on the moon at least two times a condition has been created that is suitable for the birth of life.

During these periods, the emissions of highly heated volatile gases and water vapor occurred, which could lead to the formation of craters with liquid water and the formation of a dense atmosphere. Such conditions can last for millions of years.

The assumptions of the scientists are based on the results of recent space missions and the analysis of samples of moonstones and soils, which show that the moon is not as dry as previously thought.

A big final. Cassini burned in the air of Saturn

Science also suggests that a young terrestrial satellite may have a magnetic field that protects possible forms of life against the deadly influence of open space.

Life on the moon could have originated in the same way as on earth, but it is more likely that a meteorite could have carried it, researchers believe.

The first evidence of life on earth, fossils containing traces of cyanobacteria, belongs to the period 3.5-3.8 billion years ago. At that time the solar system was bombed with giant meteorites. It is not excluded that the simplest microorganisms such as cyanobacteria can come to the moon with their help from the earth.

The authors of the work do not state that life on the moon really existed. But they recognize the existence of suitable conditions for this.