A shameful monument for Soviet footballers in the village of Vityazevo 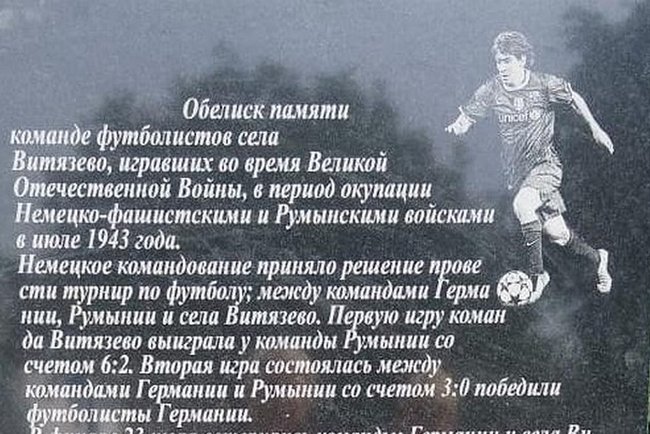 In the Krasnodar village of Vityazevo, a photograph of the Barcelona spire Lionel Messi was placed on a monument for Soviet footballers who had defeated the Germans during the Second World War.

Funds for the monument were collected by family members of footballers and residents of Vityazevo. The fact that besides the list of Soviet football players is the image of Messi with the ball of the Champions League, only opened at the opening of the monument.

"The magazine with the text design was with the sponsor, he decided that it was already a" whitish ", did not read it, he came to the manufacturer of the monument, which also came formally, did not really think about the essence of what was written, "said one of the initiators of the monument to Alexis Aleksandridi.

"A shame … a mistake in the text … WELCOME", "The sponsor did not read it, the manufacturer did not think about it." What a shame, "" I have not enabled the google photos "," Thank you Messi for winning! "- these are just the nicest reactions of social networks.

Earlier we wrote that it was unknown Vandals have spoiled the statue of the vanguard of "Barcelona" and the Argentinian national team Lionel Messi in the trendy Puerto Madero district of Buenos Aires. This time the picture was broken legs.

You're watching the news now "" Thanks Messi for the victory ": a monument to the game of Soviet footballers with the Germans during the war blew up the social network." Watch other football news in the block "Latest news"