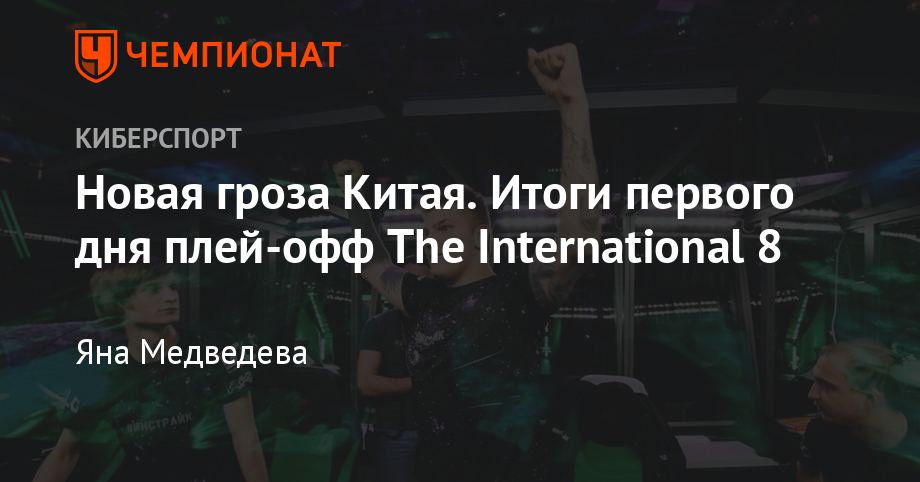 The first day – it is the hardest. The opening ceremony of The International 8, the performance of Gabe, the first victories of the favorites and the four teams that left the tournament, hardly stepped on the Rogers Arena stage. The audience laughed at the interview with Team Serenity, wept over the words kpii after the loss of Newbee and ravaged the valerian and validol shares in the Winstrike contest. And for those who have missed all this – an assessment of the results of the first day of the playoffs TI8 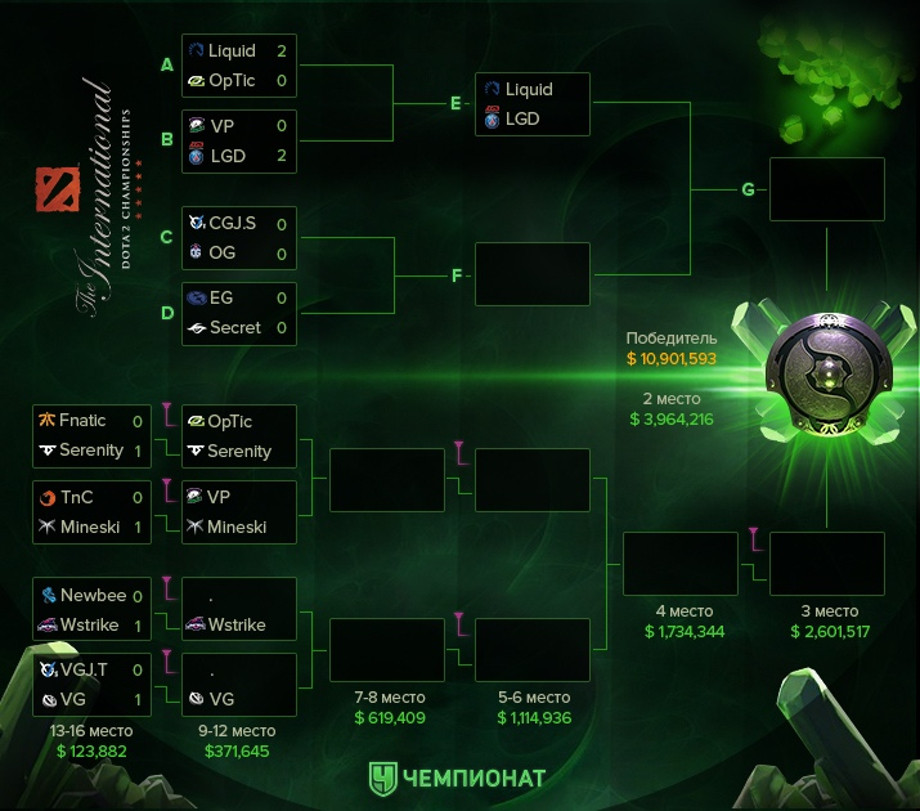 OpTic – Liquid (0: 2). On the last day of the group stage, you play with 5-0, you go miraculously to the top grid and you get a match against Team Liquid in return. Instead of cutting the ribbon at the opening of TI, the current champions moved to OpTic Gaming. Hardcore Clinkz with statistics from 10-0-9 and Ursa from Miracle 12-2-4.

Virtus.pro – PSG.LGD (0: 2). This game is worth watching in three cases: you love DotA, you do not feel sorry for VP, and you love to fight without having to pay attention to main characters. Because of one Black Hole in LGD milk, the whole game was turned around and it just went to the throne. After such a defeat VP could not get to the second card and forgot that Ame can not be bred on Terrorblade.

Fnatic – Team Serenity (0: 1). When the Fnatic coach, Curtis Aui_2000 Ling, emerged from the player's box, he could not remember the depth of the opponents and said they took everything they had worked out in training. I wonder how long it took for Envy Ursa to train with Boots of Speed ​​until the end of the game and discovered at the level of enemy support of the fourth position? But Serenity played so that they were again called the new Wings.

TNC Predator – Mineski (0: 1). It was a very uncomfortable game, where one team did not want to push, and the other – to fight normally. TNC Predator took Pugna, won almost 20k benefits and was afraid to go to the high ground. As they clambered on the sidewalk, Mushi nafarmil five slots and pressed the Ultimate, Moonn left the base and found a rune of double damage – and two minutes later the game ended.

Newbee – Winstrike (0: 1). Bodja promised that the Khan would roost in the playoffs and Khan roasted in the playoffs. Fans from the CIS had to finish the set Validol during the next fight with Roshan, but even the "Camphor" was on their side. And if someone thinks that Clockwork is not in the meteor and is not a hero at all, then Nongrata has a conversation with you and a few hooks.

Vici Gaming – VGJ.Thunder (1: 0). The great Chinese battle of the great ultimates, in which LaNm won the Earthshaker and lost to Yang on Magnus. BigDickSlam did not break the legendary Terrorblade of Sylar. And you know, judging from this game, you can even miss Global Silence in the Dot.

The moment of the day

The murders of Roshan? Elegant Echo Slam or RP? Interview with Casey? Yes, who cares, when Gabi Newell reappeared at the opening ceremony of TI8, shook his pussy and said his solemn "Welcome to the International!". Even if it was almost inaudible.

Players of the day

Everyone has already remembered that Fy can not be given to Rubick. Now we have to learn that it is no less dangerous and useful on Tusk.

The most important hero of the day for the CIS and not only. Nongrata and his Clockwerk performed a real show in a match against Newbee. You will not get much for such a Roshana.

The failure of the day

An error that Virtus.pro will not forget for a long time, if something goes wrong in the bottom grid. First, the decision to fight money for ransom without money. Players LGD have noticed that the VP has bought and was ready to last to fight. And then Black Hole in the ground in an attempt to catch the elusive Storm Spirit. And no matter how much cool BH you play for the game, only this one will remember it.

But above all they do not distinguish themselves from VP, but they are responsible for everything that happens in The International. The first day of the playoffs began with problems with the balance of sound and strange switching between cameras. Then after the business card Team Liquid OpTic Gaming appeared on the stage. And then it turned out that there are so many mistakes in the previews of the teams that it is possible to put together an entire encyclopedia.

For example, there were three Hassans on TI. 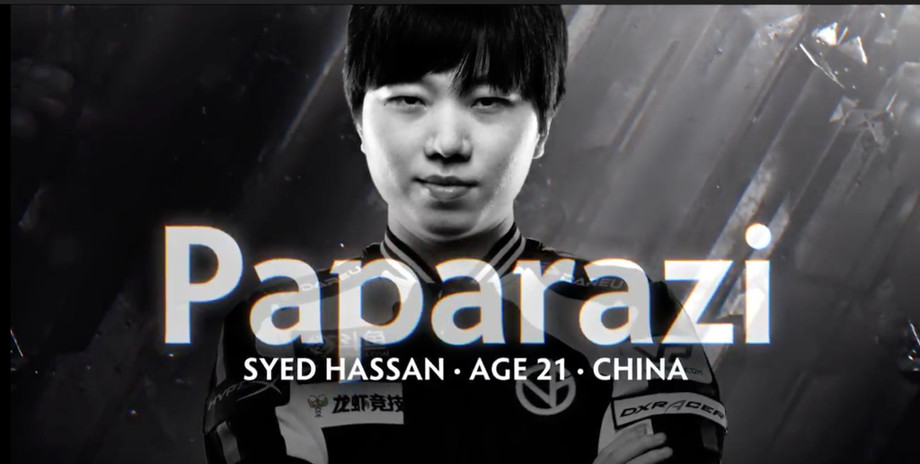 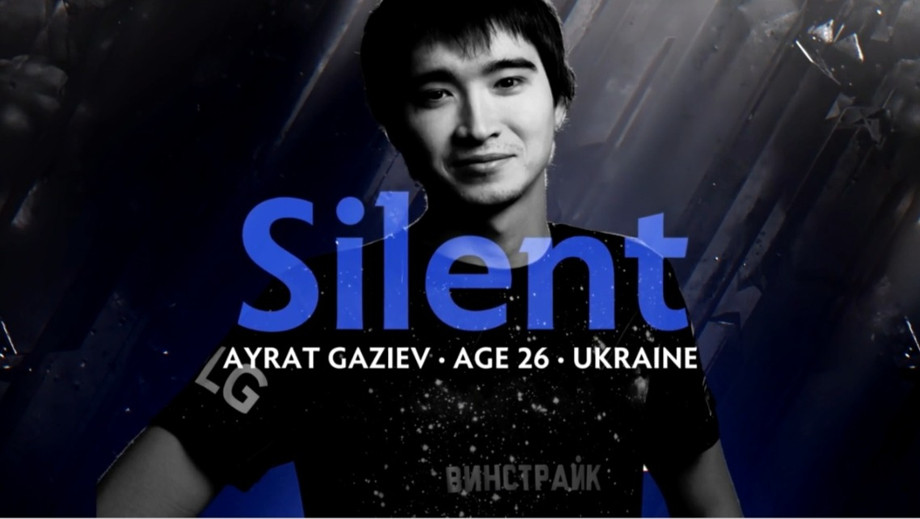 And dozens of other confused names, ages and nationalities. Okay, although the team is not confused.

"What it was" of the day

One team was removed with beautiful business cards about team building, the road to The International and the relationship between the players. And for Mineski and IceIceIce they made a video about how they will play to win. Carefully, a bit 18+.

Fantasy team of the day

Most points are scored by those who put the team cards Miracle, Maybe, Mind_Control, xNova and Solo. A bit behind of their comrades in the roles Ramzes, Ame and Kuroky. The maximum "unprocessed" glasses of today could be 165.5 points.

Statistics of the day

Big TOTEM-lanm with their Echo Slam for the card against VGJ.Thunder. causes almost 7000 damage. Twice he fell for a four. But it is better to see it once than to read it again on Twitter.

In this period, the best-of-1 on The International 8 is over. Then, only a series of up to two wins, where you can not refer to luck or random. But it does not hurt to have them on their side.