The economic crisis, the fear of Argentineans to the familiar 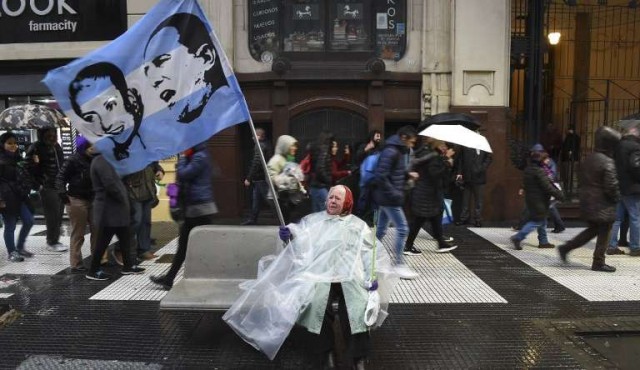 The economic crisis, the fear of Argentineans to the familiar

A week of tireless currency depreciation caused the nerves of the Argentines to falter. The exchange rate, followed from minute to minute, dominated discussions in restaurants, schools and customers of shops and banks.

Between Monday and Friday, the peso lost almost 17% and reached 50% of the decline against the dollar in the year. And although Argentines earn and pay in pesos, they mentally do the bills in the US currency, a safe haven in a traditionally volatile and unstable economy.

In that mental account they feel that they have lost half their wages and that the products cost twice as much. .

In the restaurant that she runs in the center of Buenos Aires, Marisabel Escudero says that "nothing has been said".

Afternoon fears and frustrations are exchanged. "A customer told me he went to the bank and sold dollars to 39 pesos and a few minutes later he was already 40. I should have waited!" Invokes this 31-year-old woman.

Squire feels the first effects already. This week there were fewer customers than usual and the suppliers did not bring him stationery or bags. She thinks they are holding them while they set new prices. "And maybe we will go up again on Monday," he says.

Before a previous exchange round, the government of Mauricio Macri approved in June with the International Monetary Fund for 50,000 million dollars in three years. This week, with the peso under bombing, they agreed to a renegotiation to advance the payments of funds.

Many fear that the current financial crisis will lead to a catastrophe, as they remembered in 2001, when Argentina stopped payments and the "corralito" was established, which included a limit of 250 pesos (equivalent to $ 250) per week. of all bank accounts.

"Today it may not be the same, we do not have that limitation," says Diego Kopushián in his clothing store in Buenos Aires after calling that episode. "But apparently this dollar produces the uncertainty."

He has been working alone with his sister for months, because the accounts do not give him employees. But he wants to see the crisis as an opportunity.

"We believe that people abroad, tourism, come here to consume in a short time, since Argentina is now cheap again in dollars, we hope that the Argentine industries will return, that Argentina will be recruited," he says.

In the 2001 crisis, "we lost all our customers in a week," reminds Esteban Martucci, director of the agency Oil Studio, to look for work outside the country.

Now he feels, however, that his freedom of choice, in which a total of twelve people work, is in a better position than when, because that experience "taught us that we should be prepared".

"Since then, we have been thinking about how we can offer our services outside of Argentina and now our revenues are diversified, with a share of customers and contracts in other Latin American countries," he explains.

"We feel the crisis"

Beyond the fear, the frustration or the will to find the right side of the situation, the Argentines seem to repeat something familiar again.

"Argentines believe that these crises are natural, we never want them, but we feel them, the changes that the country needs have not yet been made," says Martucci.

Marisabel Escudero just entered adolescence in 2001 and did not have to deal with the difficulties that existed. Now in the restaurant, although worried, she is not surprised. "Older people tell me that occasionally Argentina goes through, and there is a shortage of supplies and the peso is worth nothing".