They register 63 deaths by Ebola in the northeastern Congo news 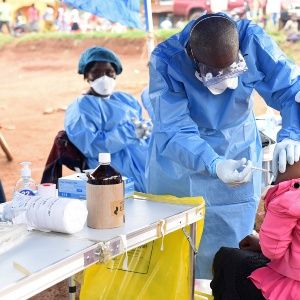 the World Health Organization (WHO) reported, this Friday, that the tenth Ebola outbreak that originated in the Democratic Republic of Congo (DRC)to the northeast it has been loaded in three weeks, Kill 63 because of the epidemic.

The deputy managing director of the WHO for preparedness and response to emergency situations, Peter Salama, indicated that the outbreak is currently limited to six different locations in the provinces of North Kivu and Ituri.

Salama noted that more than 80 percent of cases and deaths thanks to ebola have occurred around the epicenter of the outbreak, the city of Mangina, in the province of North Kivu and near the border with Uganda.

Moreover, the official stressed that the epidemic experts are currently following up more than 2,200 contacts at the six sites where the ebola.

He added that "a total of seven teams vaccinated more than 2,000 people, including more than 500 health professionals and 600 children"

The last bulletin of the ministry of RDC published this Thursday, indicates that to date a total of 103 cases have been registered, of which 76 have been confirmed and 27 in the category of suspect. He adds that nine people have been cured and 31 have been hospitalized.

The Congolese authorities have also replaced the free health care in the three worst affected areas: in Mabalako, the area with more cases and more deaths from ebolaand in Oicha and Beni they refer to media.