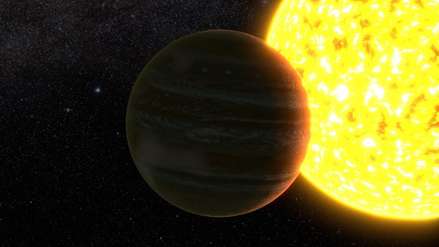 Chilean scientists discovered two new exoplanets of the "hot Jupiter" type, huge gas balls similar to the colossus of the Solar system, said a statement released Friday by the Center of Excellence at Astrophysics and Allied Technologies (CATA). Both objects identified as K2-237 b and K2-238 b, orbit around stars similar to the sun and nearly 1500 light years away from the earth, in the constellations of Ophiuchus and Aquarius.

The first of the planets (K2-237 b) spinning around his star every two days, while the second one (K2-238) runs his or her job for three days. Both have a slightly higher mass than Jupiter, the fifth planet of Solar system and this is part of the so-called outer or gaseous planets. "It is estimated that both planets consist mainly of hydrogen and helium," said the physician in Astronomy at the University of Chile, and currently a postdoctoral researcher at the University of Chile. University of London Queen Mary, Maritza Soto.

Soto, who led the research, explained that there is an important detail in this discovery: K2-237 b is an inflated planetthat is, the size is much larger than what the theoretical models indicate, because it is a very interesting planet for atmospheric studies. The theory states that inflation is caused by the heat that falls from the star to the planet it penetrates deeply and blows it up like a balloon.

To detect these planets, various instruments were used in Chile, most of which were in the La Silla Observatory of the European Southern Observatory (ESO) in the Atacama Desert.

"The main contribution of the research is that it provides evidence for the study of inflation of planets, which is a phenomenon seen on many planets (called)"Hot Jupiter& # 39; but we still can not quite understand it, "the doctor emphasized undergrowth. He explained that the next step in this line of research, involving a dozen or so scientists, is to study the atmosphere of the planet K2-237 b.

"That will not be immediate, but we hope that data for that purpose will soon be collected," concluded the astronomer. To detect these planets, various instruments have been installed in it Chili, most of them are in the Observatory The President of the European Southern Observatory (ESO), in the northern Atacama desert, the most important intergovernmental astronomical organization in Europe and the most productive astronomical observatory in the world.