The mysterious eye of the Sahara: the mythical Atlantis?

In the years & # 39; 70 space travel began. NASA astronauts James McDivit and Edward White revolve around the Earth in the space mission "Gemini 4" when they saw something on our planet that caught their attention.

In the ubiquitous yellows of the Sahara desert, a strange formation emerged, practically circular – rather with concentric lines, in the form of a spiral – which they called "the eye of the Sahara", and also "the Richat structure".

This remarkable geographical form, slightly more, slightly less, the eye – that is in the desert near the city of Oudane, in Mauritania, and has a diameter of about 50 kilometers, was unknown until that day of 1965. Why? Just because you can only fully appreciate it from space.

The origin of this formation is still uncertain. Initially, it was thought to have been generated by the impact of a meteorite, but later studies tended to point out that it could be a symmetrical structure of an anti-cell dome created by the effect of erosion over millions of years.

Up to 2,500 million years ago, when the Proterozoic began, a period that lasted until 542 million years ago. From that time on are the rocks that form the center of the eye. Those who are part of the external parts, on the other hand, date from the Ordovician period (between 485 and 444 million years ago).

The truth is that this "eye of the earth", which seems to be investigating the universe, is a mystery. And shoots all kinds of versions like all enigma. Perhaps the one who excites most is the one who ensures that this structure is strikingly similar to the representation we have of mythical Atlantis, according to the description of the philosopher Plato. He described that mythical city island established by Neptune as circular and divided into concentric circles of earth and water interspersed. 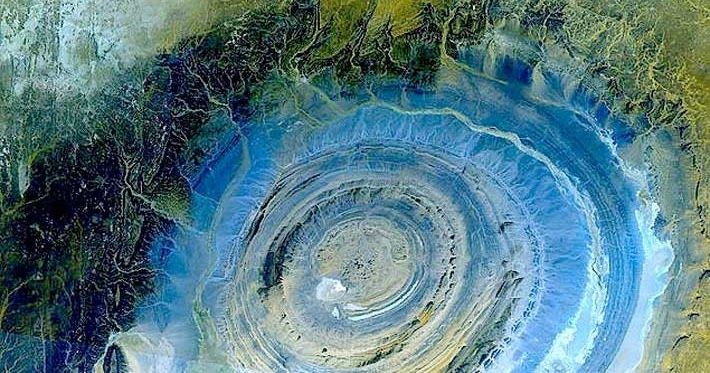 It depends on the time of the year that it changes color for its minerals.

A curious antecedent of this lost lost version of the city appears in the novel "L & # 39; Atlantide" by the French author Pierre Benoit, published in 1919.

There Benoit describes the theory that the mythical city has not really sunk into the sea, according to the classical interpretation of the Critias of Plato, but that around the island, with concentric circles of islands, walls and channels, the earth.

So, for him, Atlantis is in the solid mass of Ahaggar, in the middle of the Sahara, surrounded by oceans of sand, and in it still a descendant of the Atlantic dynasty, Queen Antinea ("the new Atlantean") reigns.

Far from being able to reveal the enigma, we just enjoy it, as well as the beautiful views of this amazing "eye" in the middle of the desert.