Barcelona defeats Valladolid and retains its leadership in Spain news 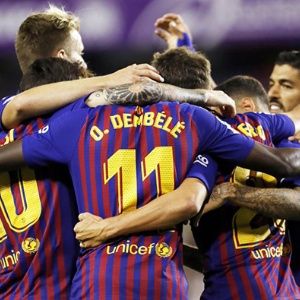 the FC Barcelona beat this Saturday until Real Valladolid for day 2 of Spanish football, thanks to a lonely both I Dembélé, and became the leader of the leaderboard for the time being.

At minute 57, the Mosquito scored after a good assist from Sergi Roberto and got the three points needed to stay ahead of the competition.

However, the Catalan team was about to lose two points, as Valladolid player Keko scored at minute 92. But the goal was canceled from the game, thanks to the tool of the VAR (assistant video recorder), which will be released this week. first applied in Spanish football.

The game in the Nuevo Zorrilla was characterized by controversy that was raised by a lawn that was inadequate to play a football game. Despite the claim of the Barcelona players, the game had to be played.

Those led by Ernesto Valverde start this season in a perfect way and win the Spanish Super Cup against Sevilla and their league debut with 3-0 against Alavés, with two goals from Argentine Lionel Messi and one from Brazilian Coutinho.