The 14th anniversary of the debut of the Messi League

venezuela October 16, 2018 SPORTS, venezuela Comments Off on The 14th anniversary of the debut of the Messi League 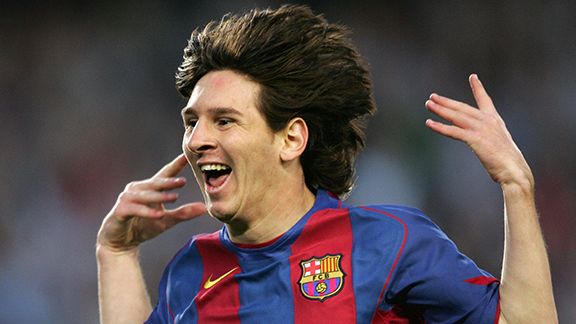 BARCELONA – Lionel Messi celebrates 14 years as First Division footballer, always in Barcelona and remembers on 16 October 2004, when he went with 8 minutes to a derby in Montjuïc Frank Rijkaard decided to go into the field to replace Deco.

That evening, the azulgrana team, leader with 5 wins and 1 draw in the rucksack, added a tight victory with 0-1 and the flea, along with the one that was on the brink of fellow countryman Hugo Ibarra, came to play 4 balls, being a spectator / secondary luxury in the victory of a Barca who was catapulted to the leadership a day earlier, remained at the top of the rankings until the end of the championship when he after six years of drought conquered the League 2004-2005.

The captain and spiritual leader of the club had completed the first seven days with Barça B, commissioned by Pere Gratacós, and two days before the derby, his coach in the subsidiary slipped from the opportunity to be called to the first team. Overwhelmed by the injuries of Gabri, Silvinho, Motta, Gerard, Edmilson and Giuly, Rijkaard quotes the native Peña, Christian, Damià … and Messi.

The Barça formed that 16 October with Víctor Valdés in the goal; Belletti, Puyol, Oleguer and Van Bronkhorst in the defense; Márquez midfielder with Xavi and Deco in the interior, Ronaldinho in the playmaker and the couple Eto & # 39; o and Larsson in the lead. He scored early, 9 minutes, Deco, and at 67 minutes he came into the Iniesta field instead of Eto & # 39; o. And in the last part, when Barça had his tight victory under control, the time had come.

Messi was warmed up in the band when deputy Carlos Naval phoned him and the fourth umpire showed the tablet with Deco number 20 as a player to replace and 30 de la Pulga as his replacement. It was played on the 82nd minute. That's where everything started …

Eight days later, on October 24, he played his first 19 minutes in the Camp Nou, in a match between Barça and Osasuna. The Barça team won 2-0 with goals from Eto & # 39; o and Ronaldinho when he was the Brazilian, a nod to the fate, who left his place to Messi. After three days he started in the cup match against Gramenet (1-0 defeat) and returned to the subsidiary, not being a protagonist with Rijkaard until December 4, when he played, replacing Oleguer, the last 9 minutes of another clash against Málaga who won Barça 4-0.

On 7 December he enjoyed his premiere in the Champions League, starting as a starter in Ukraine against Shakhtar, who beat Barça 2-0 in an inconsistent match, and before the end of 2004 played 1 minute in Albacete and 32 for Levante to suffer, back to the subsidiary, his first expulsion in Tafalla against Peña Sport.

From there it seemed to disappear from the plane, because Rijkaard had not counted on him until the month of February 2005, when he took the place of Mallorca and later on 3 April against Betis. After a week he enjoyed 5 minutes (instead of Maxi López) against Getafe and on May 1st he stepped in the 87th minute for Eto & # 39; o. After one minute he got an assist from Ronaldinho and lifted the ball over Valbuena, but the referee, Velasco Carballo, canceled it for offside … In 90 they repeated more or less the same piece. And Messi managed the first of his collection of goals as Barça.

If you want to receive notifications European football, download the app now. espn.com/app »

The rest is history.

It all started on 16 November 2003, when he made his debut in a friendly match against Porto de Mourinho in Portugal, but it was exactly 336 days after 11 months, when Rijkaard gave him the opportunity to play his first official game. From League and, no less, against the great Catalan rival, an Espanyol got that opportunity later in August 2005, to deal with his assignment.

So it was not of course because it already exploded in a Gamper against Juventus de Capello and began to rise to the legend. That in which today is installed. 14 years after the presentation of himself, a cold autumn night, in Montjuïc.