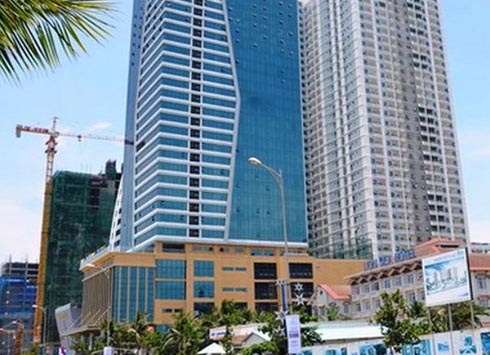 During the inspection, however, the functional forces continued to detect a number of serious errors in this project, so a written proposal and Danang's city leaders agreed on the procedures for organizing coercion in accordance with the law.

Announcement No. 305 / TB-UBND of the People & # 39; s Committee of the Ngu Hanh Son district, related to the decommissioning plan at the Muong Thanh Hotel Complex and the Son Tra Apartment Building, 8 August 2018 will remove, remove violations from the 2nd to the 5th floor of the project. However, due to the actual inspection of the project, the investor, in addition to the violations from the 2nd to the 5th floor, built and violated some items in the building block that do not comply with Building License Number 235 / GP-XD of 17/02 / 2016 issued by the Ministry of Construction. For these new violations, the District People & # 39; s Committee coordinated with the Inspectorate of the Department of Construction a report of the incident, completed the dossier and worked with the investor to treat the violation.

The Department of Construction, the Department of Justice, the City Police and the City Fire Fighting Police are responsible for providing technical assistance in dealing with the aforementioned violations; Go unanimously from the moment that the work of violation from level 2 to level 5 is enforced to supplement and complete the plan for the settlement of all identified violations. The People's Committee of the Ngu Hanh Son District is responsible for the rapid completion of the treatment plan in accordance with the regulations; It is necessary to pay attention to the solutions for the emergence of safety and order and safety of people and property in enforcement.

Municipal police, fire brigade and fire brigade must, in the context of their duties and powers, appoint their professional units and police to handle strictly the content of compliance with the law on residence, safety and order, fire and explosion prevention and control. ; At the same time, resolute measures must be taken to ensure the safety of people and property of households at the moment in the factory.

In 2016, the Da Nang City Department of Construction licensed the Muong Thanh Hotel Complex and Son Tra Apartment, the project includes 42 floors and 2 cellars; From the 2nd to the 5th floor it got a permit to build a parking space, a kindergarten, a swimming pool … However, the owner has converted the 4-storey building into 104 apartments. Many households have lived and worked here, but have not received the user rights certificate. On 26/9/2016 the inspection of the building department of Da Nang gave a decision on the sanctioning of administrative violations of VND 40 million to the investor and the investor requested to stop the construction of the works that were in violation. However, the investor did not meet the requirements of the competent authorities, but continued to violate the regulations during the execution of the project.