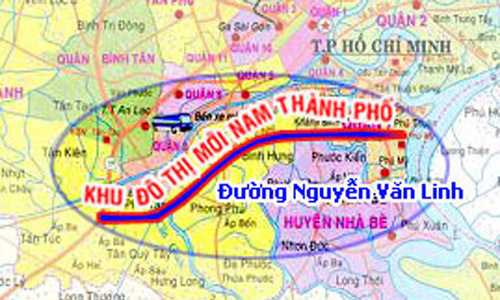 In the report that explained the post-country inspection in Ho Chi Minh City, the City People's Committee recognized the shortcomings without consulting the Prime Minister, but issued the Decree 5080/1999 – New Urban Area in the South.

However, the City People's Committee said that this does not change the direction of development master plan was approved by the Prime Minister. The amendment was also consulted by the city at the Ministry of Construction and Decision 5080 was replaced by Decision 6555/2005.

The content of the planning in Decision 6555 has been updated Project on the adaptation of the master plan for the construction of the city until 2025 and approved by the Prime Minister by Decree 24/2010, as well as updated 1 / 5,000 scale urban construction detailed planning (layout planning) Southern City New Urban Area approved by the City People & # 39; s Committee in Decision 6692/2012.

In order to have a basis for management and continued implementation of the projects, the city proposed to the prime minister to approve the conversion of eight functional zones in decision 5080 and to enable the city to continue implementing Decision 6555.

A series of other projects wrong

About the delayed construction of Ngoc Dong Duong House, the People's Committee of Ho Chi Minh City, said that the apartment project in A22 initially has an area of ​​over 13,700 m2 (in Zone 13A – Function area 13) – New urban area of ​​South City) invested by Hong Quang Construction and Real Estate Joint Stock Company.

Subsequently, the company transferred the land use rights to Ngoc Dong Duong Company to continue the project with the start of the commitment in December 2013. But due to financial problems, this unit recommended support.

In 2016 Ngoc Dong Duong the project did not start as committed and did not make the report on investment control. The board of directors of the South has proposed to the People's Committee of the city to instruct the Department of Natural Resources and Environment to inspect the situation of land use and to treat it according to regulations.

In June, the South Zone Management Board obliged the owner to commit to the progress of the construction and completion of the works, otherwise it will be handled in accordance with the regulations. Subsequently, Ngoc Dong Duong Company in August wrote procedures for the implementation of the project.

About three projects: residential area more than 28 ha in the Binh Hung district – Binh Chanh district; a residential area of ​​2 ha in the An Lac district (Binh Tan district) and a residential area in the An Lac district, Department of Natural Resources and Environment of the city advised to allocate land in accordance with the approved urban master plan and in accordance with the 2003 Land Act, Decree 181/2004, Decree 69/2009 of the Prime Minister Minister. Thereafter, the aforementioned projects are approved by the People & # 39; s Committee in the approved planning and planning of land use.

In addition, the HCM City People & # 39; s Committee also reported to the government the handling of 17 projects that overlap the road safety zone. Including the Saigon South Development Joint Stock Company project to build technical infrastructure for traffic and public works for residential construction, land transfer if not allocated.

Earlier, since 2011, the Government Inspectorate has concluded that 2889 indicates a series of wrong projects during the implementation of investment projects in Ho Chi Minh City. Due to the delay after the inspection, in July, permanent deputy prime minister Truong Hoa Binh had to direct the city to deal with it.

The municipal government has issued several reports on the handling of liability for violating persons and organizations as stated in Inspection Conclusion 2889.

The new urban area of ​​the southern city is planned on an area of ​​nearly 3,000 ha, including a 17.8 km long backbone road; 120 m wide and 10 lanes. This urban area starts at the gate of Tan Thuan Export Processing Zone via District 7, 8, Binh Chanh District; stop on Highway 1 towards the Mekong Delta.

The 21 functional rooms have been built on two sides of the road into a modern, multifunctional city for mixed use, including financial, commercial, service, clean industrial, scientific, cultural, medical care, recreation, recreation, entertainment with a population of around 500,000 people.

This is part of a series of projects to develop Ho Chi Minh City to the South China Sea, including Tan Thuan Export Processing Zone, Hiep Phuoc Power Plant, Hiep Phuoc Industrial Zone, Hiep Phuoc Port Urban Area. The aim of the city is to transform the poor, backward, low-lying agricultural area into a modern and civilized metropolis.