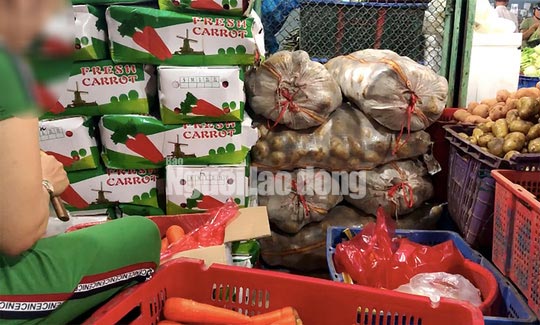 At 8-8, more than 20 hours on the market Thu Duc agricultural products (Thu Duc district, Ho Chi Minh City), hundreds of trucks with vegetables, roots and fruit from Dalat rushed down for the barbers.

Also buy how much

Reporters want to buy about 100 kg of potatoes Dalat, a landlord took us to a lot of introduced is the potato grown by people in the district Don Duong, Lam Dong Province. New items just a few hours ago.

Since the potato tubers were too big, long, thick and very shiny, we asked to cut some bulbs to see if the inside of the intestine is really Dalat. The owner immediately refused: "You look good, Dalat potatoes have this yellow skin and the intestine will be yellowish or milky white, while the Chinese potatoes, the skin will be white, dark yellow … depending on the type of potato."

Many owners of wholesale markets in Thu Duc agricultural products said that some from the garden of the people, but also many goods from the rice trays in Don Duong district or Duc Trong district as CE, MN, HL … remarkable Mrs. L., an owner of fruit and vegetables at the agricultural product market of Da Lat, said her correspondent came from China and mixed with the land in the potato growing area of ​​Lam Dong to "change her life". Da Lat and then omit the term for the above.

Although farmers and traders in Lam Dong province claim that the potatoes and roots of this area are not yet harvested every night, there are dozens of trucks and container trucks that transport these goods from the Lam Dong and Dak Nong provinces. Lau, Gia Lai market Thu Duc wholesale agricultural products; It was then hired by truckers. About 7 o'clock the next day, all the above items have been purchased by the small company.

In our view, small traders will be distributed to sell in traditional markets. Some of them are "recruited" for sale in some supermarkets, convenience stores in Ho Chi Minh City, Binh Duong, Dong Nai …

According to Nguyen Binh Phuong, vice-director of the marketing department of the wholesaler and trading company of Thu Duc, about 250 tons of agricultural products are put on the market every day. The items include: fruit (pomegranate, pear, plum, apple, grape …), dried onion, dried garlic, ginger, potato, carrot, cabbage, cauliflower

With the above process, the case of Chinese agricultural products has been "contracted" somewhere to re-label and mix Vietnamese agricultural products, the management company has no control. However, Mr. Phuong said that every owner of stalls and baskets in the market must also keep their prestige and they do not like to mix business with each other.

"Thu Duc's wholesale market is a wholesaler in large quantities, buyers are professionals, so it's not easy to be deceived." On the market only potatoes have Chinese potatoes, Da Lat, when two products are next to each other. Buyers are easy to distinguish and they have to buy the right value, not to buy Chinese goods that pay in Da Lat. It is also necessary to distinguish the businessmen within the registered wholesale from the outlets in the market "- noted Mr. Phuong.

According to Phuong, agricultural products imported from the border to the wholesale market comply in principle with the traceability rules when each box contains detailed information about the goods. "However, if the goods on the retail market are not further checked, fraudulent origin occurs, especially when consumers are not interested in Chinese goods that can be sold easily." Phuong proposed.

"With functional industries, the company is recognized as Chinese goods, but when the functional forces leave, there is a businessman from another province, the other is called Dalat potatoes, they are just right, this is a commodity in Da Lat, so consumers can not distinguish themselves and simply take their losses.This is a very difficult problem to deal with, in the immediate future we would like to lobby traders honestly in companies to ensure the prestige and health of the consumer … " – said Mr. Hung.

Being caught on a basis

Interdisciplinary teams discovered the Doan Thi Che building, tel 19, used a potato washer and then covered the earth on the washed potato. The confiscated item consisted of an igniter, a washing machine and a ton of potatoes, China covered the land and sold many other bills. Ms. Tea said that to do this at the request of the customer to reduce consumption. After washing and mixing, the potatoes are bagged and stamped (this stamp is issued by the Da Lat Market Management Board).

Previously, the Lam Dong Provincial Forest Management Department discovered that trucks with nearly 4 tons of carrots and 200kg of Chinese garlic had no vouchers.

According to the employees